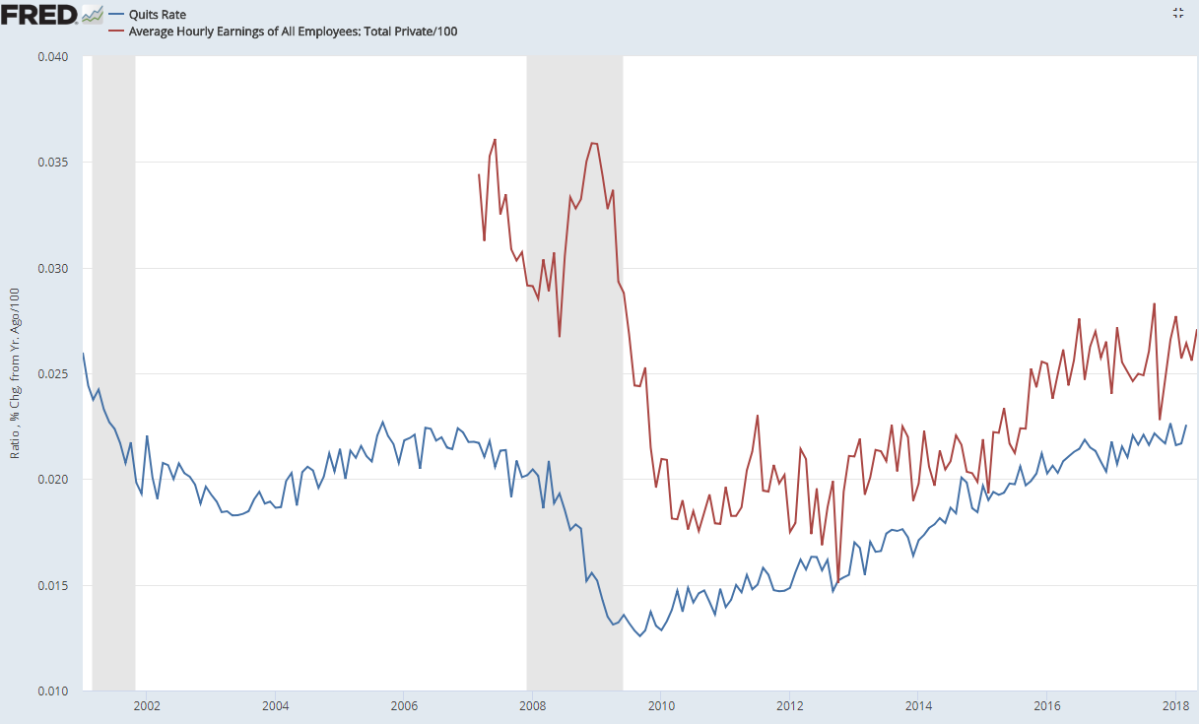 Job openings continue to creep upward, hitting 6.7 million in April, which is just about the number of unemployed people in the country. Job openings increased in manufacturing, but fell in finance. The quits rate was flat MOM at 2.3% and is up about 20 bps since last year. The quits rate is a strong predictor of wage inflation, as it measures people leaving jobs to take new, higher paying ones. Below is a chart of the quits rate versus wage growth. Wage inflation is a bit more volatile, but the correlation is pretty tight.

The ISM non-manufacturing index rose in May to 58.6. The current level historically corresponds to a GDP growth rate of around 3.5%. Tariffs are weighing on many sectors however.

The House Financial Services Committee will hold a hearing tomorrow to discuss transparency and accountability at the CFPB. This hearing is the result of a memo from Mick Mulvaney, which recommended that the CFPB be subject to Congressional appropriation, that major rules be passed by legislation, that there be an independent Inspector General, and recommended that the agency report to the President.

Home prices rose 1.2% in April, according to CoreLogic. On a YOY basis, they are up 6.9%. They expect home price appreciation to moderate over the next year and increase about 5%. Much of the country’s real estate is becoming overvalued, according to CoreLogic’s model – in fact, over half. The valuation metric is based on incomes, which is why an expensive market like San Francisco may appear fairly valued, while areas on the Gulf Coast may seem overvalued.

Over the past 2 years, about 4.4 million jobs have been added in the US. How many houses have been built? 2.4 million. Great illustration of just how acute the housing shortage is.