Stocks are flat this morning after personal incomes came in as expected. Bonds and MBS are flat.

Personal Incomes rose 0.3% in April, in line with expectations. Personal Spending rose 0.6%, higher than the 0.4% estimate and inflation was tame at 2% YOY, with the core rate up 1.8% YOY. The big jump in consumer spending will probably have some strategists taking up their estimates for Q2 GDP. March and February spending numbers were revised upward. Inflation remains in check, which will give the Fed the leeway to hold off on hiking rates if the European situation with Italy escalates.

Pending Home Sales fell 13% in April, according to NAR. The supply / demand imbalance remains the story: Lawrence Yun, NAR chief economist, says the housing market this spring is hindered because of the severe housing shortages in much of the country. “Pending sales slipped in April and continued to stay within the same narrow range with little signs of breaking out,” he said. “Feedback from Realtors®, as well as the underlying sales data, reveal that the demand for buying a home is very robust. Listings are typically going under contract in under a month1, and instances of multiple offers are increasingly common and pushing prices higher.”

Mortgage rates fell 10 basis points last week, and this is even before the huge bond market rally on Tuesday.

Deutsche Bank was put on the troubled bank list last year. This was obviously a big impetus behind its decision to reduce its US footprint. The German regulators have been on top of the bank as well. With credit default spreads widening in the Euro banking market, expect to see the European Central Bank tread extremely cautiously with policy normalization, and for the Fed to adopt a wait and see attitude after hiking in June. Separately, if Deutsche Bank decides to exit the US entirely, wouldn’t it be wild to see them spin off Bankers Trust?

Job Cuts fell to 31,517 in May, according to outplacement firm Challenger, Gray, and Christmas. This is the seasonally slow period for job cuts, as most companies concentrate them in Jan-Feb time frame. The cuts are mainly coming in retail, although things are picking up in the financial sector. Regionally, they are concentrated in the Northeast, particularly NY and NJ. 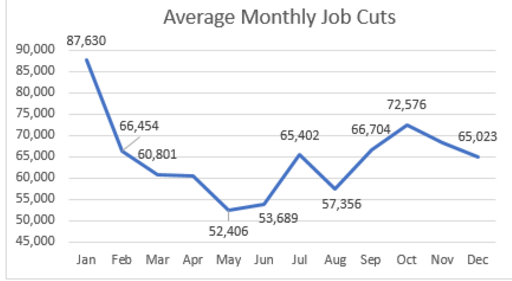 The Trump Administration is set to push for tariffs on European steel and aluminum. A German magazine said that Trump told French President Emannuel Macron that he wanted to “stick to his trade policy long enough until no Mercedes-Benz cars were cruising through New York.” The deadline for negotiations is this Friday.

US regulators are set to sand off some of the harder edges on Dodd-Frank and the Volcker Rule. The biggest change requested from the industry is the rebuttable presumption that any position held for less than 60 days is considered a proprietary trade. Essentially, this is a “innocent until proven guilty” scenario. The Fed also intends to clarify the liquidity management exception, which is meant to distinguish between market-making and proprietary trading. At the end of the day, falling commissions and tightening bid/ask spreads have made market-making an unprofitable business for the most part anyway. I suspect investors and regulators are in for an unpleasant surprise the next time we have a crash and the only bids in the market are retail GTC orders.

The number of underwater homes fell below 10% in the fourth quarter for the first time since the crisis. Torrid home price appreciation has cut the percentage down to 9.1%, or about 4.4 million homes. “For much of the country the Great Recession is an increasingly distant memory – the American economy is booming once again and markets are now shifting their gaze to future downturn risks,” said Zillow senior economist Aaron Terrazas. “But scattered in neighborhoods across the country, the legacy of the mid-2000s housing bubble and bust lingers among the millions of Americans still underwater on their mortgages, trapped in their homes with no easy options to regain equity other than waiting.” The worst areas? Chicago, Virginia Beach, and Baltimore.