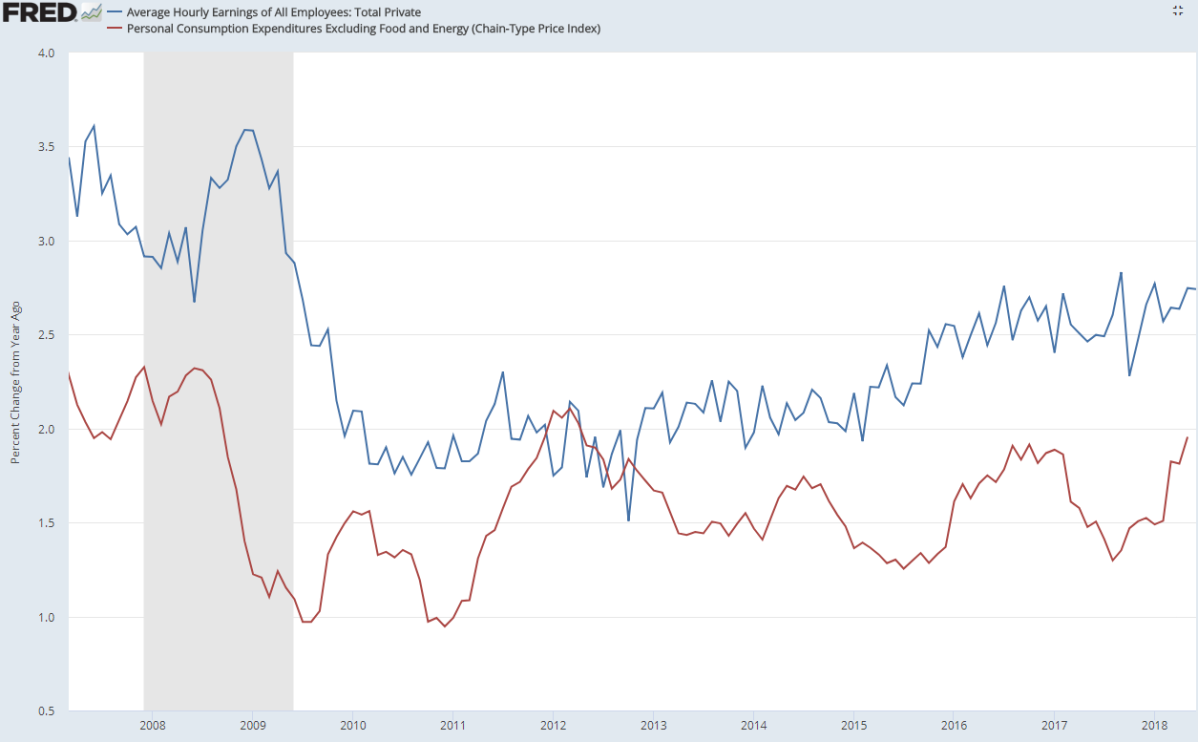 Housing starts hit their lowest level since September last year, falling to 1.17 million annualized. This is a huge drop from the strong May print of 1.33 million. The Midwest and the South explain the declines, which was both in single family and multi. June weather was generally good, so that isn’t the explanation. Building Permits fell as well, although not as dramatically. They came in at 1.27 million. The Midwest accounted for most of the decline in permits. Housing starts tend to be volatile, but the moving average is turning down, which is worrisome.

Despite the drop in starts, builder confidence remains strong, at least according to the NAHB. The index was flat at 68, which is an elevated number. Pricing remains strong, but the supply is not there. Rising material costs are becoming an issue as lumber tariffs raise costs. So far builders are able to pass these costs on, but there is a limit, especially if wage inflation remains below house price inflation. The median house price to median income ratio is getting back to extreme levels, and interest rates are not going to come to the rescue this time around.

Jerome Powell begins his second day of testimony on Capitol Hill. There was nothing market-moving yesterday, so expect more of the same. Yesterday, his message was that the US economy has clear sailing ahead with strong growth and moderate inflation. With regard to the potential trade war, Powell downplayed the risks to the economy and said there will be a benefit if it turns out that Trump’s actions lower tariffs overall in the global economy. The US generally has much lower tariffs than its trading partners, and Trump has already made the offer to eliminate all US tariffs if our trading partners eliminate theirs. Separately, Powell said that it would ultimately be better for the US if the GSEs were off the government balance sheet. That is pretty much a universal opinion in DC these days, as the US taxpayer bears the credit risk of the majority of the mortgage market.

Median weekly earnings have not kept pace with the CPI lately, which means workers are losing ground, at least according to the latest survey out of the BLS. It shows that the median weekly wage rose 2% in the second quarter versus an increase in the CPI of 2.7%. Interestingly, the average hourly earnings increase during Q2 was 2.64% in April, 2.74% in May and 2.74% in June. It seems strange that the difference between average wage inflation and median wage inflation would be so stark, which would imply that wages are mainly rising at the high end, not the lower end. Note the other BLS measure of wage inflation, the employment cost index, shows comp growth of 2.9%, which takes into account benefits. For the most part, average hourly earnings have been rising faster than the core PCE index: 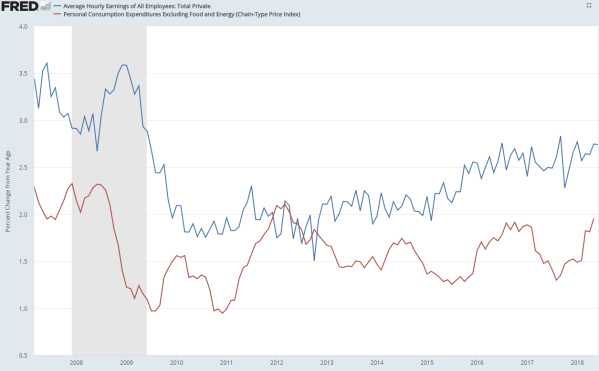 New York, Connecticut, New Jersey, and Maryland sued the government yesterday over the state and local tax deduction cap. The lawsuit if probably more for show than anything and doesn’t seem to have much chance of success. Some of the states are looking at workarounds, allowing people to “donate” to charitable funds which go to funding state and local services. Charitable deductions are still deductible. At the end of the day, the biggest issue to states like NY and NJ are the property taxes. NY and NJ have some of the highest property taxes in the country, where people routinely pay $20 – $30k or more. That explains at least partially why you can’t find buyers for luxury properties in the Northeast.

The ECB concludes that QE may have helped the rich, but it helped the poor more. While QE did boost asset prices (housing, bonds, stocks etc) it also boosted growth, which more than offset the increase in asset prices.  “Low short rates do hurt savers via a direct effect, that is a reduction in income on their assets . . . however [low rates] also benefit savers, like all other households, via an indirect effect — that is, the reduction in their unemployment rate and the increase in the labour income,” the paper, called “Monetary policy and household inequality”, said. “The indirect effect dominates . . . The paper also finds that [QE] reduced inequality, mainly through a reduction of the unemployment rate of poorer households.”

Note that this contradicts the observation between median and average earnings. If QE was actually decreasing inequality, you should see median earnings growth close to average earning growth or even slightly higher. Not way below.