Stocks are flat this morning on no real news. Bonds and MBS are down.

Global bonds are under pressure this morning on fears that the Bank of Japan may make some changes to its monetary policy. While these sorts of things don’t impact the US directly, global sovereign bonds tend to trade as a group and US yields will be influenced by them.

We have a lot of important numbers this week, with personal incomes / personal spending on Tuesday and the jobs report on Friday. We also have the FOMC meeting on Tuesday and Wednesday. No changes in policy are expected, however the language of the statement will be in focus as always.

FHFA Director Mel Watt was accused of sexual harassment. His term expires at the end of the year, but he will probably be shown the door regardless.

The homeownership rate increased to 64.4% from 64.3% in the second quarter, according to the Census Bureau. This is a 4 year high. Interesting, the geographic dispersion is quite large, ranging from 59.7% in the West to 68.3% in the Midwest. Affordability matters, but that is a big divergence. We also saw a marked increase in younger homeowners, with the under-35 age cohort increasing from 35.3% to 36.5%. Rental vacancy rates fell from 7% to 6.8% while homeowner vacancy rates were flat at 1.5%. The overall homeownership rate is below the long term average, however the increase that started in 1994 and ended with the top of the housing bubble was probably artificial. 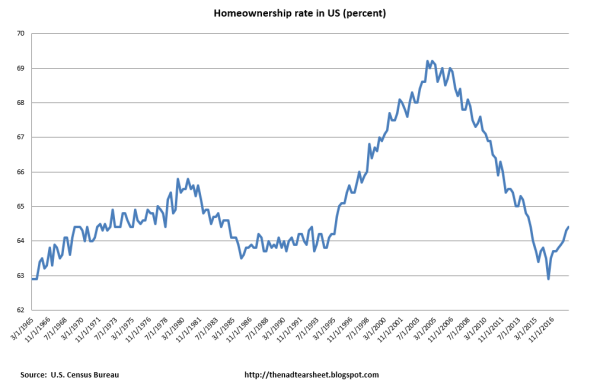 Pending home sales rose 0.9% in June, according to NAR. While this is a nice uptick from May, contract signings are still down 2.5% on a YOY basis. It looks like we are seeing an uptick in inventory in some of the MSAs with the biggest inventory issues: Seattle, San Jose, and Portland. With the lion’s share of 2018 in the books already, NAR is projecting a decline in existing home sales for 2018 of 1% and an increase in the median home price of 5%.