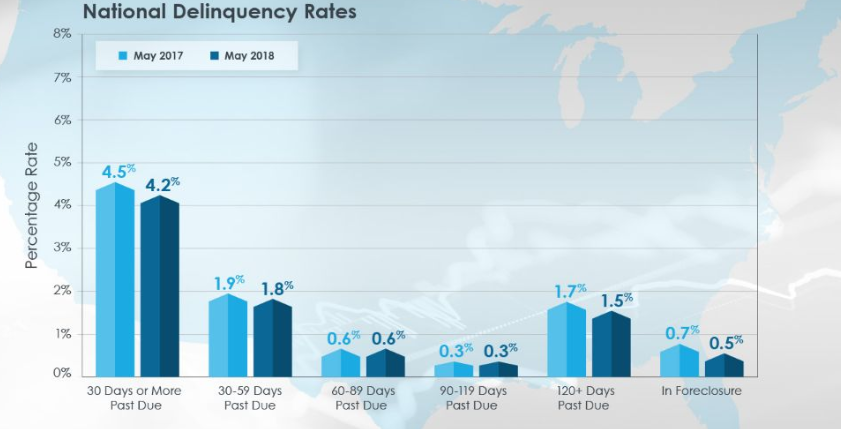 Stocks are lower this morning on overseas weakness. Bonds and MBS are up.

Kind of a mixed bag with economic data this morning.

Retail Sales came in well above expectations in July, with the headline number rising 0.5%. The control group, which excludes autos, gas, and building materials was up the same amount. While July’s numbers were strong, June’s estimate was revised downward, so expect to see a downward revision on Q2 GDP from the first estimate of 4.1%.

Mortgage Applications fell 2% last week as purchases fell 3% and refis were flat. The typical mortgage rate fell 3 basis points, which helped push refis up to 37.6% of all mortgages.

Productivity increased 2.9% as output increased 4.8% and hours worked increased 1.9%. Compensation costs increased 2%, so with the productivity gain, unit labor costs fell 0.9%. This will certainly make the Fed happy, as higher productivity leads to higher non-inflationary wage growth and higher standards of living. This is the preliminary estimate for the second quarter and will be subject to revision.

Industrial production only managed a 0.1% gain in July, and manufacturing production was up 0.3%. June numbers were revised sharply higher, so that offset the weakness. Capacity Utilization was flat at 78.1%.

Homebuilder confidence slipped last month to the lowest in a year as labor shortages and higher material prices dampen sentiment. “The good news is that builders continue to report strong demand for new housing, fueled by steady job and income growth along with rising household formations,” said NAHB Chairman Randy Noel, a homebuilder from LaPlace, La. “However, they are increasingly focused on growing affordability concerns, stemming from rising construction costs, shortages of skilled labor and a dearth of buildable lots.”

Despite the strong economic news, we are starting to see a bit of a risk-off trade in the structured credit market. Bank of America has gone negative on structured products and agency MBS. This means that mortgage spreads are widening which will either lead to higher mortgage rates or lower profit margins (probably a bit of both). That said, B of A is calling for a flattening of the yield curve, which will offset the wider spreads at least somewhat.

The strong economy is lowering delinquencies, according to CoreLogic. The 30 day + DQ rate fell from 4.5% to 4.2% in May. Seriously delinquent rates are lower overall, except for the hurricane hit states of Florida and Texas. The California wildfires have the potential to goose up DQ rates in the coming months.