Stocks are higher as the Fed begins their 2 day meeting. Bonds and MBS are down small.

Home prices rose 0.2% MOM  / 6.4% YOY according to the Case Shiller House Price Index. Prices are appreciating at a slower rate than last year (the second derivative has flipped to negative) and we are seeing less dispersion between geographic areas. The yellow highlighted portion of the graph shows the derivative flipping. The convergence is happening at both extremes – the red-hot Western markets are cooling a little, and some of the laggards in the Northeast and Midwest are picking up a little. 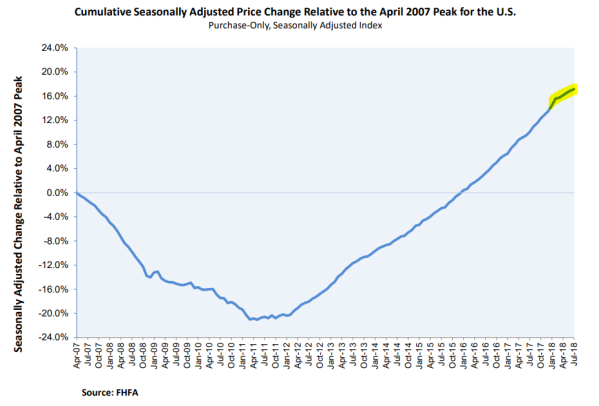 JP Morgan is out with an aggressive call this morning: The Fed will raise rates every quarter through June 2019, taking the Fed Funds rate up to 3.0%. FWIW, the Fed funds futures are predicting only a 6% probability of that forecast, which would have to include an off-meeting hike or a 50 basis point hike at one of the meetings to play out. IMO, the Fed would need to see inflation accelerate meaningfully from here to do that, but the dot plot forecast tomorrow will tell a better picture.

The jump in the 10 year over the past month is setting up for a “buy the rumor, sell the fact” situation if the FOMC statement and dot plots are not sufficiently hawkish. In other words, if the statement is hawkish, the move up in rates has kind of already been made. And if it is dovish, we should see a retracement back down in rates.

Regardless of the increase in rates, the consumer remains ebullient, with the Consumer Confidence index increased in August and is sitting close to an 18 year high. Retailers are noticing as well, as same store sales rose 5.8%. This is despite a run up in gasoline prices. Q4 GDP should be well-supported by strong consumption numbers. It is surprising to see the jump in oil prices have pretty much no effect on confidence or spending. It could be an indication of rising wages.

Fascinating statistic: It can cost $750,000 to build a unit of affordable housing in California. Obviously it is hard to come up with a business model that supports it at those sort of pricing levels.