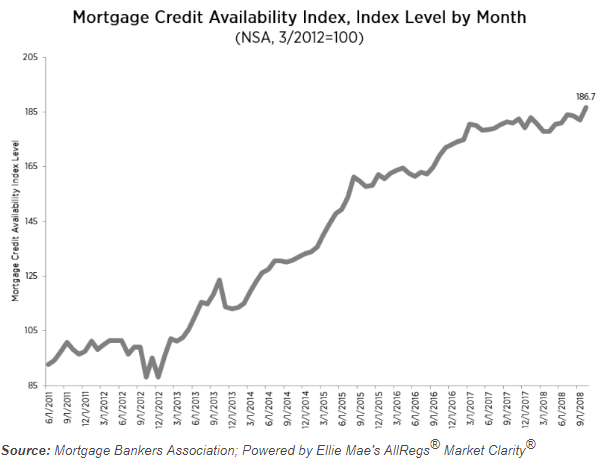 Stocks are higher this morning after Midterm elections. Bonds and MBS are flat.

Democrats took a narrow 7 seat majority in the House last night, while Republicans increased their majority in the Senate. There were largely no surprises last night – urban voters stayed reliably Democrat, rural voters stayed reliably Republican, however some suburban voters flipped from Republican to Democrat. That change could have been due to either (a) the tendency of educated voters to skew more Democrat, or (b) tax reform. I wonder if tax reform played a part, since higher income suburban voters probably got hit the hardest from the deduction limits on property taxes and state / local taxes.

One takeaway from the election: Progressive darlings flopped. Beto O’Rourke, Richard Cordray, and Andrew Gillum all lost. So while the energy in the D party is with the resistance, that doesn’t necessarily mean the voters are there too. The Blue Wave never materialized. The other takeaway: The Never Trump Republicans (the John McCains and the Bob Corkers) are gone as well. So DC is going to be more polarized than ever.

What will the election mean for markets? Nothing. Gridlock is generally positive for the stock market, and the bond market is being driven by the Fed. Oh, by the way there is a Fed FOMC meeting starting today.

There were about 7 million job openings at the end of September, according to the JOLTs report. This is a decrease of about 285k jobs from August’s record 7.3 million number. The quits rate was flat at 2.4%. While anecdotal evidence abounds regarding the inability of companies to fill positions and retain workers, that has yet to really show up in the government’s numbers.

Home prices rose 5.6% MOM in September, according to CoreLogic. They estimate that 38% of all MSAs are now overvalued, when looking at home prices versus incomes. Just under 20% were undervalued. Of course overvaluation / undervaluation is a moving target, so that can all change if incomes rise, especially if mortgage rates stay the same. Betting on a flattening yield curve late in an economic cycle is usually a decent bet, especially after the Fed finishes a round of monetary tightening.

Mortgage credit availability increased in October according to the MBA Mortgage Credit Availability Index. “Credit availability increased in October, driven largely by an expansion in the supply of conventional credit, while government credit fell slightly over the month,” said Joel Kan, MBA’s associate vice president of economic and industry forecasting. “Reversing a trend from last month, lenders made more conventional and low down payment programs available to prospective borrowers. This increase in supply was likely in response to a growing number of first-time home buyers in the market, as home price appreciation has slowed and wage growth has picked up. Jumbo credit availability also expanded last month, with the jumbo index increasing again to its highest level since the survey began.” 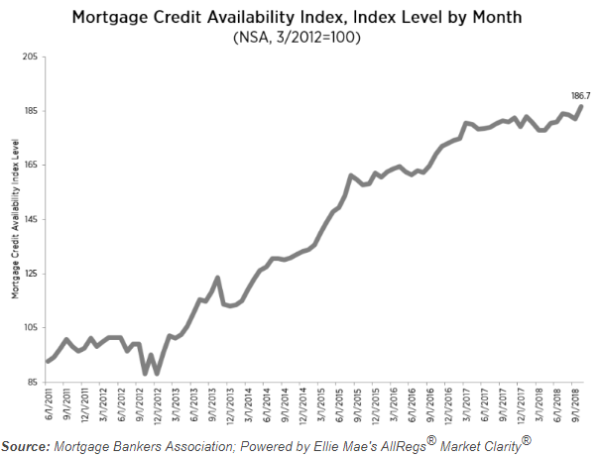 Last week’s drop in interest rates didn’t have much of an effect on mortgage applications, as the MBA’s index fell 4%, driven by a 3% drop in refis and a 5% drop in purchases. Activity hit a 4 year low.

Zillow is getting into the home buying business in Houston, by making cash offers for homes from qualified sellers and then listing the home for sale. It looks like Zillow is selling this as a service to make it easier to sell a home rather than just real estate speculation, but who knows? We do know that Z-estimates are often wildly inaccurate, so Zillow might not have such a big edge.