Dueling bills to end the shutdown will be voted on in the Senate today, with neither one having much chance of passing. The point of holding these votes is to hopefully create some avenue for compromise. Separately, Trump will postpone the State of the Union address until after the shutdown is over.

The government estimates that first quarter GDP could be flat if the government shutdown lasts for the whole quarter. There is always some seasonal noise that depresses Q1 GDP relative to the rest of the year, and the added effects of the shutdown would exacerbate that.

House prices rose 0.4% in November, according to the FHFA House Price Index. On a YOY basis, they were up 5.8%. Take a look at the chart below – you can see how much the hot markets out West have cooled down.  That said, the FHFA index is holding up better than indices like CoreLogic or Case-Shiller. This is because the index focuses on conforming loans only, which makes it a starter-home heavy index and that is where the demand is. 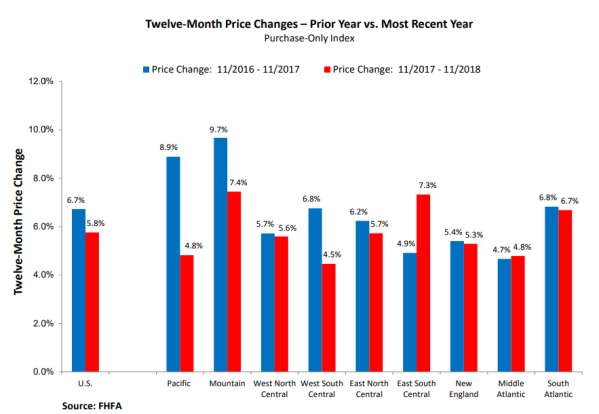 There has been another major leak of financial data, this time affecting mortgage and loan data from Citi, HSBC, Wells, Capital One, and HUD. The data contained names, social security numbers, and bank account numbers. Much of the data was quite old, dating back to the bubble years.