Markets are flat after the Fed maintained interest rates. Bonds and MBS are up.

The FOMC held interest rates steady at their January meeting. The statement was taken as dovish, but it is hard to read much into it. The Fed noted that job gains and household spending was “strong” while inflation remained “muted.” They said they can remain “patient” with respect to future moves. In his press conference, Powell mentioned there was talk about slowing the pace of balance sheet reduction, which will make interesting reading once the minutes come out. Bonds initially yawned at the decision, but picked up momentum throughout the afternoon to close on their highs. 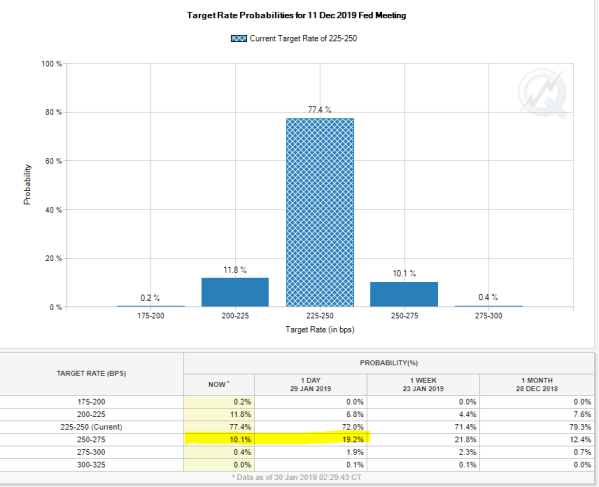 Mortgage applications fell 3% last week as purchases fell 2% and refis fell 6%. There is some noise from the MLK Birthday holiday. Rates were largely unchanged.

The economy added 213,000 jobs in January, according to the ADP jobs report. This was well above expectations and is much higher than the 158,000 estimate for tomorrow’s jobs report. So far, it looks like the government shutdown didn’t spill over into the real economy, which makes sense – it was only a partial government shutdown – and the whole thing was more about tribal signalling than anything else.

Pending Home Sales fell 2.2% in December, according to NAR. Year-over-year contract signings were down 10%, which is the 12th consecutive month of declines. All geographies saw a drop, with the South being affected the worst. Blame higher rates and home prices which are decreasing affordability.

FINRA has again delayed the implementation of Rule 4210, which mandated risk limits and margin requirements for TBA transactions, spec pools, and CMOs. The net effect will be to increase liquidity for smaller mortgage originators. The rule has been delayed until March 2020. The rule treats mortgage originators (who hedge their pipeline with TBAs) the same as hedge funds who speculate in commodity contracts, which doesn’t make a lot of sense.