Stocks are flat as we await earnings from market heavyweights like Amazon and Alphabet. Facebook’s numbers beat the street, while Tesla disappointed. Bonds and MBS are down small.

New home sales came in weaker than expected, but at least exhibited positive growth. In June, we saw new home sales of 646,000, which was up 7% MOM and 5% YOY. New home inventory 338k units, which represents a 6.3 month supply.

Durable Goods orders rose 2% in June, according to Census. Ex-transportation, they rose 1.2%, and ex-transportation and defense they rose 3.1%. Non-defense capital goods orders (ex-aircraft) rose 1.9%, which shows that businesses are expanding capacity.

The ECB opened the door to future stimulus this morning, saying they saw rates lower over the next 12 months. The German Bund is slightly stronger, however we are still close to record low yields at negative 37 basis points. The Bund set a record for the longest streak of days in negative territory – now 79. This eclipses the record set in 2016. What exactly does “negative yield” mean? It means the German 0s of ’29 is trading at 103.66. It is a zero coupon bond, meaning it pays no periodic interest. You pay 103.66 and on August 15, 2029, you will get back 100. 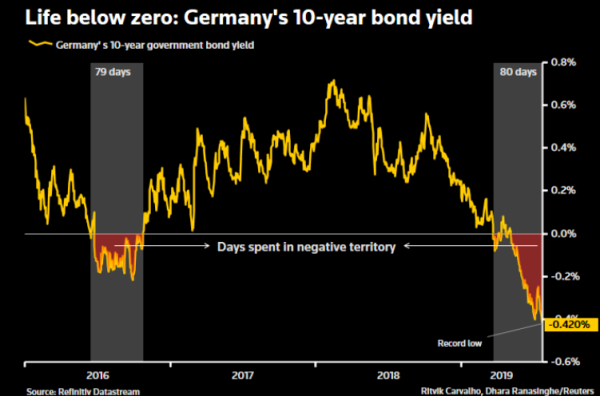 To get an idea of how much things have changed in Europe, remember the PIIGS? The PIIGS were an acronym for Portugal, Italy, Ireland, Greece, and Spain – all high-yielding sovereign debt that had fiscal issues. Where are they now? All yielding less than the US 10 year, with Greece at 1.95%, Portugal at 38 basis points, Ireland at 11 basis points, Italy at 1.48% and Spain at 33 basis points. Don’t forget, a huge swath of the European corporate sector trades with negative yields.

Most (if not all) of these countries have debt-to-GDP ratios well over 1, so we are seeing a real-time test of the hypothesis that government debt levels don’t matter. The granddaddy of debt to GDP ratios is Japan, sitting at 2.4x and its 10 year bond yields negative 15 basis points. Who knows how all this ends up, but we have a global sovereign debt bubble of epic proportions.

Bill Gross used to call the US the “cleanest dirty shirt” in the world. Indeed. For all the handwringing over debt to GDP ratios, the US debt to GDP ratio sits at just over 1, and a good chunk of that is owned by the Fed. Essentially, the low yields overseas cannot help but act as an anchor for US yields, which means unless the bubble overseas pops, I can’t see an impetus to push rates dramatically higher. And the first rule of bubbles is that they go on longer and go further than anyone expects.