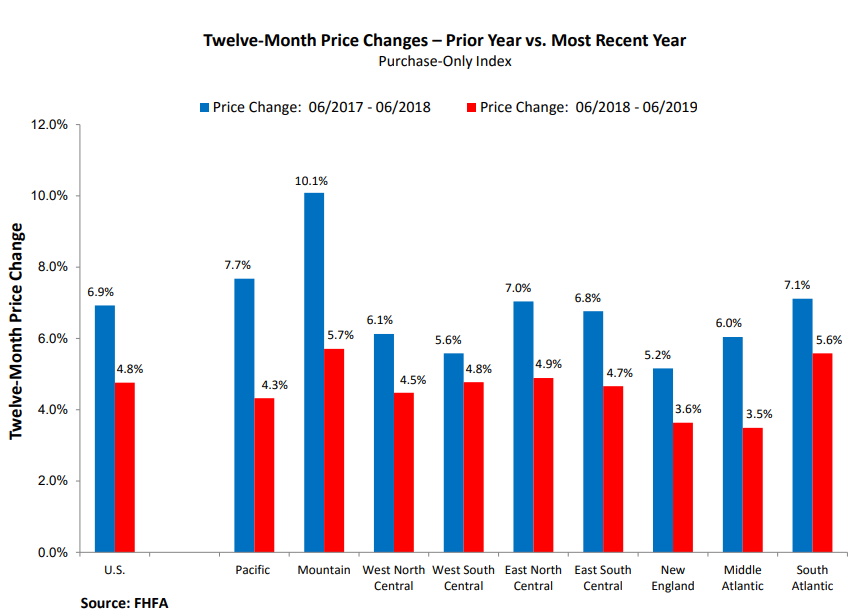 Stocks are up this morning on no real news. Bonds and MBS are flat.

Home prices rose 3% YOY and were flat MOM according to the Case-Shiller Home Price Index. “The southwest (Phoenix and Las Vegas) remains the regional leader in home price gains, followed by the southeast (Tampa and Charlotte). With three of the bottom five cities (Seattle, San Francisco, and San Diego), much of the west coast is challenged to sustain YOY gains. For the second month in a row, however, only Seattle experienced outright decline with YOY price change of -1.3%. The U.S. National Home Price NSA Index YOY price change in June 2019 of 3.1% is exactly half of what it was in June 2018. While housing has clearly cooled off from 2018, home price gains in most cities remain positive in low single digits. Therefore, it is likely that current rates of change will generally be sustained barring an economic downturn.”

Meanwhile, houses with conforming loans rose 5% on a YOY basis, according to the FHFA House Price Index. The previously hot markets on the West Coast are cooling, although if you focus on homes at the lower price points, they are still up YOY. Note that many of these indices are looking at data that is a couple of months old. Prices aren’t yet taking into account the big recent drop in rates.

The Trump Administration is set to release its plan on dealing with Fannie and Fred just after Labor Day. The government is eager to shrink its involvement in the mortgage industry and the concern is that asking the GSEs to hold bank-like capital levels will raise costs for homebuyers. The government is likely to reduce the GSE’s footprint by limiting the types of loans they can purchase – especially second homes and cash-out refinances. Another issue is the explicit government guarantee for MBS issued by Fannie and Fred, which will require Congressional involvement. “The report is likely going to have a lot of language about embracing congressional reform and reducing the GSE footprint, which most market participants support. But if the real intent is to end conservatorship administratively, then the MBS market will react very negatively,” said Michael Bright, chief executive of the Structured Finance Association. What that means is that if the Administration privatizes the GSEs without maintaining the government backstop, then MBS prices will fall, and that will raise mortgage rates at the margin.