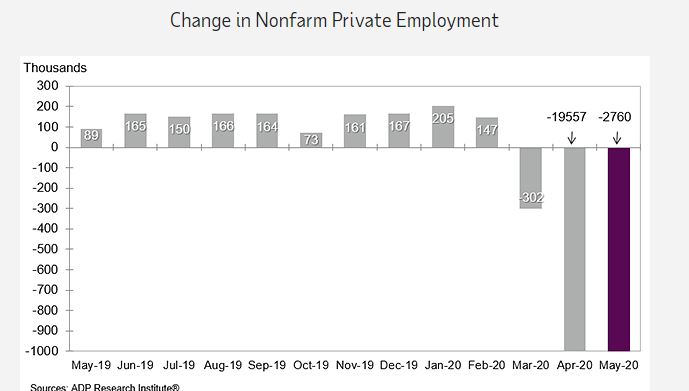 Stocks are higher this morning on evidence that the global economy is recovering from the COVID crisis. Bonds and MBS are down.

The economy lost 2.76 million jobs in May, according to the ADP employment report. This was well above the street estimate of 9 million. The Street is looking for a loss of 7.5 million jobs in Friday’s jobs report, so perhaps we could see an upside surprise there. “The impact of the COVID-19 crisis continues to weigh on businesses of all sizes,” said Ahu Yildirmaz, cohead of the ADP Research Institute. “While the labor market is still reeling from the effects of the pandemic, job loss likely peaked in April, as many states have begun a phased reopening of businesses.” 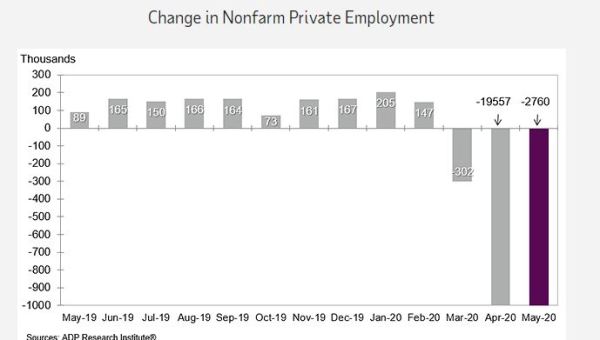 So, according to AFP, we have lost about 22.7 million jobs over the past 3 months. And, according to initial jobless claims it is over 40 million. And if you take the government’s nonfarm payroll numbers plus Friday’s estimate we get around 30 million jobs lost. Pretty wide variation between estimates. While people have been thinking that initial jobless claims have been undercounted due to computer problems, it is the outlier on job losses. Note that there has been evidence of unemployment fraud.

Mortgage Applications fell 3.9% last week as purchases rose 5% and refis fell 7%. “Purchase applications continued their recent ascent, increasing 5 percent last week and 18 percent compared to a year ago. The pent-up demand from home buyers returning to the market continues to support a recovery from the weekly declines observed earlier this spring,” said Joel Kan, MBA Associate Vice President of Economic and Industry Forecasting. “However, there are still many households affected by the widespread job loss and current economic downturn. High unemployment and low housing supply may restrain a more meaningful rebound in purchase applications in the coming months.”

The Fed promised to roll out a program to buy corporate bonds as a way to thaw the credit markets back in April. So far, they are getting no takers. It is largely a stigma issue, but also reflects the fact that credit markets have eased up over the past several weeks.