Stocks are modestly lower this morning after Paul Manafort was found guilty and Michael Cohen copped a plea. Bonds and MBS are flat.

Paul Manafort was found guilty of fraud and tax charges and there was a mistrial on the other charges. Nothing was found on the Russian front. Ex Trump lawyer Michael Cohen pled guilty to FEC violations, which relates to the Stormy Daniels case. Whether this ends up getting legs remains to be seen. FWIW, the markets are saying it is no big deal.

We will get the FOMC minutes today at 2:00 pm. Given the lack of liquidity in the markets, we could see some market movement in what should otherwise be a non-event.

Mortgage applications rose for the first time in 6 weeks as purchases rose 3% and refis rose 6%. Overall they rose 4.2%. Mortgage rates were unchanged, so that is a surprising jump in refi activity. Given that the index is sitting at lows not seen since the turn of the century, it doesn’t take much of a bump in activity to move the index.

Existing home sales fell again for the fourth month in a row. They fell 0.7% on a MOM basis and are down 1.5% on a YOY basis. This is the fifth straight month of YOY declines. It looks like much of the decline was attributable to weakness in the Northeast. The median house price rose 4.5% to 269,600.  Current estimates of median income are around 61,500, so that puts the median house to median income ratio around 4.4x. While other measures of housing affordability remain decent, this one is flashing red for valuations overall. The MP / MI ratio ignores interest rates, which are the biggest determinant of affordability, but over time house prices correlate with incomes, and it wouldn’t be a surprise to see home prices begin to take a breather. 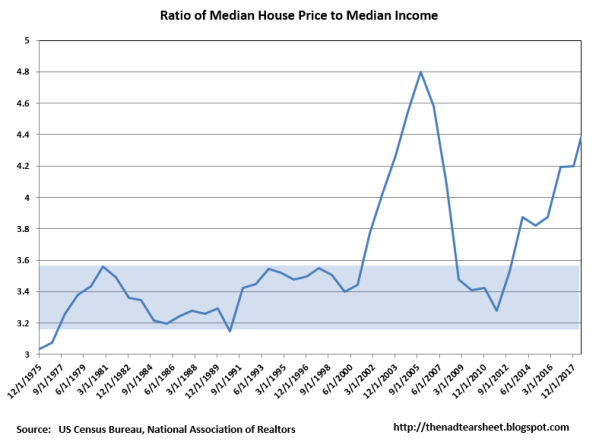 Fed Chairman Jerome Powell assured Senator Tim Scott that the Fed remains independent despite the jawboning from Trump. Powell said in a radio interview: “We do our work in a strictly nonpolitical way, based on detailed analysis, which we put on the record transparently, and we don’t … take political considerations into account,” Powell told the radio show. “I would add though that no one in the administration has said anything to me that really gives me concern on this front.” Separately, Dallas Fed Chairman Robert Kaplan said that the Fed only needs to hike 3 or 4 more times to get to neutral.