Stocks are higher this morning as trade negotiations continue with China. Bonds and MBS are down.

Italian bond yields are higher this morning, but so far the market seems to have concluded that this will not snowball into a larger European problem. That said, continuing issues in Italy will provide at least a marginal bid for Treasuries.

Nonfarm productivity was revised downward to 0.4% from 0.7% in the second estimate for first quarter productivity. Output increased 2.7% and hours worked increased 2.3%. Unit Labor Costs were revised upward from 2.8% to 2.9%. Compensation increased 3.3% and productivity increased 0.4%. Since productivity increases drive standard of living improvements and wage gains, this somewhat explains the anemic wage growth we have been seeing. These numbers are going to concern the Fed a little, given that it might increase inflationary pressures, at least at the margin. Productivity is notoriously hard to measure however, so it carries with it a lot of uncertainty. The theme of the US post-crisis has been low productivity.

Freedom mortgage was penalized for serial VA refinancings. As part of their punishment, they are no longer allowed to issue mortgages into multi-issuer pools, which will severely reduce the number of potential investors for their paper. This is a temporary restriction, and they could be out of the doghouse as soon as next year. A couple of other lenders – Sun West and NewDay also were penalized.

Wells has sold its branches in the Rust Belt to Flagstar Bank. They will continue their presence in mortgage lending, commercial and wealth management however.

The FTC and DOJ held a hearing on the potential competition issues between the Zillow and Redfin online real estate duopoly. It also covered in more general terms the effects of companies like Zillow and Redfin on the brokerage model in general. Will technology end the need for a realtor? Perhaps for the experienced and professional buyer, but probably not for everyone else. Fees could be affected though.

Steve Mnuchin urged President Trump to exempt Canada from steel and aluminum tariffs. While tariffs are in general counterproductive, it is important to remember the US has much lower tariffs than our trading partners. 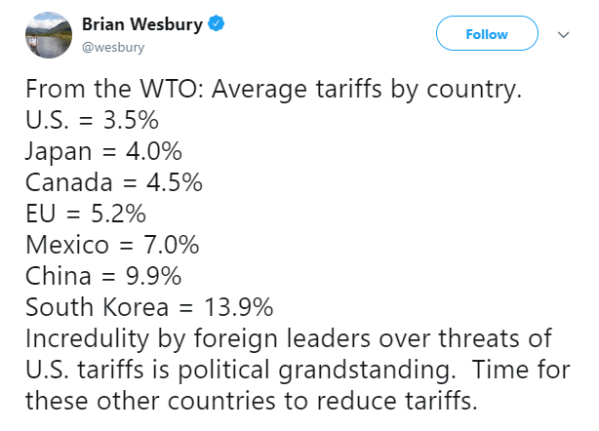 The media discovers FHA lending. And no, FHA lending is not the same as the no-no loans of the subprime days.