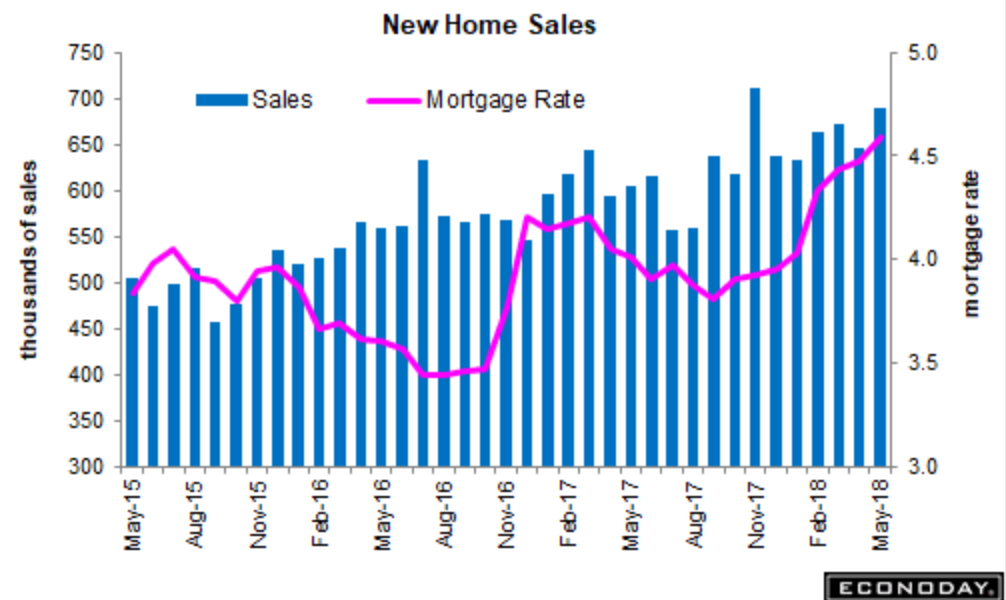 Stocks are lower this morning on continued trade tensions. Bonds and MBS are up

Economic activity decelerated in May, according to the Chicago Fed National Activity Index. Production-related indicators were a drag on the index (probably an effect of trade issues) while employment-related indicators had a positive impact once again. This index is a meta-index of 85 different sub-indices, and while it is backward-looking and generally not market moving, it provides a good global snapshot of the economy.

The trade war is beginning to have some real economic effects as the CFNAI indicated. While it is primarily limited to steel, many companies that use it as an input are raising prices, which is going to have a few negative effects on the economy – first firms that use steel and cannot pass on price increases are probably going to lay off workers, while the inflationary pressures from increased prices will keep the Fed raising interest rates. Retaliatory tariffs from our partners are causing US exporters to shift production overseas. Note that lumber tariffs are increasing the price of home construction, which is another drag on the economy.

Given the recessionary potential of trade wars the shape of the yield curve is going to become a bigger talking point for the business press and will be watched closely by the Fed. The shape of the yield curve essentially means the difference between short term rates and long term rates. The most common description is the 2s-10s spread, which is about 34 basis points at the moment. When the yield curve is strongly upward sloping (in other words, the 10 year yield is a lot higher than the 2 year yield) it generally means one of two things: either (a) the market is worried about inflation, and is therefore requiring a high interest rate to entice people to invest in Treasuries long term, or (b) the economy is so strong that investors prefer to put their money in more risky assets and therefore Treasuries have to offer a higher rate to get people interested. For the most part, the US yield curve has been in the second camp.

As the Fed has been raising the Fed Funds rate, the yield on shorter-term paper (like the 2 year) has been going up faster than the rate on the 10 year. Historically, the yield curve has flattened during tightening cycles, so this is nothing to be alarmed about. If the yield curve inverts, then that has historically been associated with the Fed overdoing it and it is taken as a recessionary signal. In the current environment, the flattening of the yield curve looks more like typical curve behavior during a tightening cycle, and not a signal of a recession. Don’t forget the yield curve has been highly influenced by central bank behavior. The Fed could drive up long-term rates by hinting at the possibility of selling some of its portfolio. Bottom line, the business press will be talking about the curve more and more, especially if the trade war begins to snowball and we start seeing a combination of rising input costs with a slowing out output.

New Home sales increased 6.7% MOM and 14.1% YOY to a seasonally adjusted annual rate of 689,000. This is the highest print since November last year. Interestingly, sales rose in the South, but fell everywhere else. In the West, where the supply shortage is most acute, sales fell by 9% MOM and are flat YOY. Both the median and average sales price fell, which is surprising given the torrid pace of home price appreciation in the home price indices like Case-Shiller and the jump in existing home sales prices according to NAR. It appears that more sales at the lower price points was behind the drop. Luxury sales have been more or less flat for the past year. Eventually tax reform is going to have an effect on the top end of the market, as luxury real estate is simply more expensive due to the changes in mortgage interest and the fact that most of the $1MM+ inventory is in high tax states. We will get more of a read on new homes this week as Lennar and KB both report earnings.

Fears of rising interest rates have clearly had no negative effects on new home sales. Given the acute housing shortage and the fact that rates are still very low historically, this isn’t really a surprise.

The Trump Administration announced a plan to reorganize many governmental agencies. The biggest one would merge the Department of Labor and the Department of Education into one agency. On the housing side, USDA loans would be moved from USDA to HUD, which is where they probably belonged in the first place. VA loans will remain under the VA however. Community Development Block Grants would move to Commerce from HUD. The document discusses the need to reform the GSEs and lays out broad ideas, but nothing concrete.