Stocks are flattish this morning on no real news. Bonds and MBS are up.

Consumer confidence slipped in June, according to the Conference Board. The decline, while still high by historical standards, was driven more by a drop in the outlook than it was by a decline in current conditions.

Home price appreciation continued in April, with some real eye-popping moves in a few MSAs. Seattle and Las Vegas were up 13%, YOY, San Francisco was up 11%. Bringing up the rear was Chicago and Washington, up 3%. While the index has hit its 2006 peak, it is important to remember these are nominal (i.e non-inflation adjusted) numbers. If you adjust for inflation, Dallas, Denver and Seattle have regained their bubble peaks, while everyone else is still lower. Inventory is still tight, but the picture is improving. 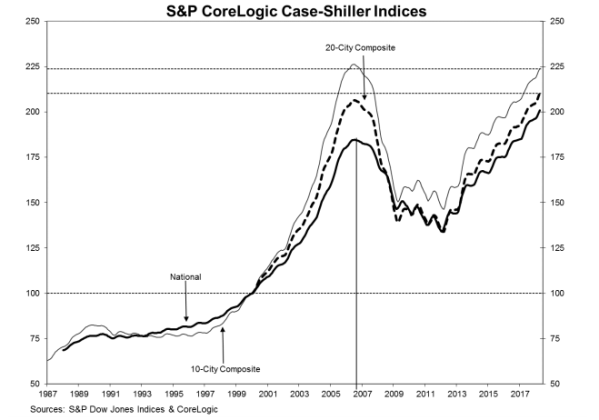 Housing demand was up 7% in May, according to Redfin. Redfin measures housing demand by counting the number of offers and requests for home tours. Demand is actually down from a year ago, but the market is still a seller’s market.

Fears of a trade war are causing big asset allocations into government bonds. The government bond ETF GOVT saw record volume on Friday of $600 million. Momentum traders are beginning to pile into the long Treasury trade. Morgan Stanley is calling the top in yields. “While trade tensions have yet to negatively impact U.S. economic data noticeably, the Fed has started to hear more concern from business contacts. We see risk that such tension will impact economic data more in the coming months, even if a benign outcome comes to pass eventually.” FWIW, the Fed Funds futures are still handicapping a toss-up between 1 or 2 more hikes this year.

For mortgage originators, trade fears are probably going to help keep the 10 year below 3%, though it probably won’t be enough to bring back refi volume or to save the year.