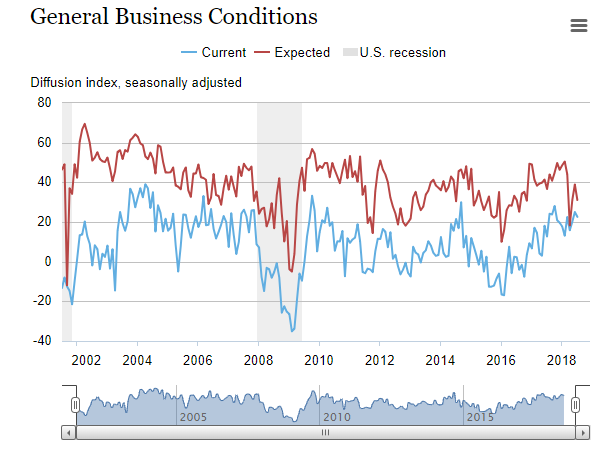 Markets are flattish as earnings season gets into full swing. Bonds and MBS are flat.

Oil is dropping after US Treasury Secretary Steve Mnuchin said the US could waive some Iranian oil sanctions.

Bank of America reported decent earnings this morning. This is a big week for earnings, with about 200 major companies reporting. The early part of reporting season is generally dominated by the banks.

Jerome Powell will testify in front of Congress on Tuesday and Wednesday. Generally these events don’t yield much in the way of useful info – they are mainly for the benefit of politicians who want to draw attention to some issue that may or may not relate to monetary policy. Expect a lot of questions regarding how a trade war and income inequality will affect growth from Democrats, and expect a lot of questions regarding regulation from Republicans. The prepared remarks are here.

Retail Sales rose 0.5% in June, which was in line with expectations. Ex-autos and gas they rose 0.3% while the control group was flat. May numbers were revised upward. The control group was below expectations, but with the May revisions offset that. Discretionary items (clothing, sporting goods, department stores) declined, which building materials and furnishings rose.

Business activity in New York State exhibited continued strength in June, according to the New York Fed’s Empire State Manufacturing Survey. While the current conditions index exhibited strength, the outlook has slipped. The survey doesn’t say whether this is being driven by a potential trade war or something else. Planned capital expenditures (a proxy for expansion plans) decreased. 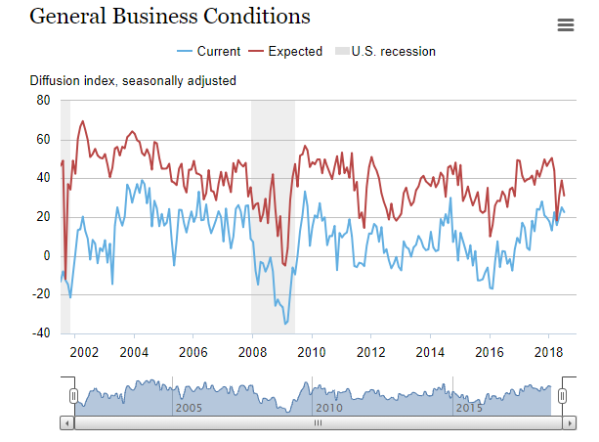 The Atlanta Fed took up their Q2 GDP estimate to 3.9%. Morgan Stanley warns that we are seeing a bit of a sugar rush in the economy courtesy of trade tensions. As companies worry about a potential trade war, they stockpile raw materials and other inputs. This gooses the inventory numbers which makes the current quarter look particularly strong. The problem is that you get a double whammy if the trade war materializes. Activity will drop, and that inventory will be liquidated, both of which will reduce GDP growth. Even if a trade war doesn’t happen, uncertainty could cause companies to pull in their horns. FWIW, I am skeptical of the “uncertainty” argument. Regulatory “uncertainty” out of DC generally causes companies to be cautious. The rest of the clatter is just noise. Certainly investors (judging by the S&P 500) aren’t worried.

One stat to watch: Corporate bond spreads. We are seeing a slight widening in some of the junkier investment grade debt. Baa spreads increased to 200 basis points from 165 in February. While spreads are still tight relative to historic levels, this is something to watch. Years of financial repression have given issuers the upper hand with regards to covenants and some of those chickens will come home to roost in the next recession.