Stocks are lower this morning after lousy earnings out of the automakers. Bonds and MBS are flat.

Donald Trump tweeted contradictory statements about trade yesterday, both extolling the virtues of tariffs and also telling Europe that he is ready to end all tariffs if they are. He is also planning to use taxpayer money to help offset the negative effects of Chinese retaliatory tariffs on American farmers. This is New Deal type stuff and I have to imagine that Congress is contemplating legislation to take control of tariffs back from the Executive Branch. When tariffs were going down overall worldwide, it may have made sense to allow the President to lower them without involving the legislative branch, but the unintended consequence was that it allows the President to conduct a trade war unilaterally.

New Home Sales fell 5% on a MOM basis, but were up 2% on a YOY basis to a seasonally-adjusted annual level of 631,000. The Street was looking for something around 680,000. New Home Sales is a notoriously volatile estimate so that number could be revised upward next month. For sale inventory came in at 301,000 which represents a 5.7 month supply.

Flagstar reported earnings yesterday. EPS and revenues rose, however there are some acquisition-related effects happening (not Stearns though). Mortgage origination volume fell by 1.5% and gain on sale fell by 6 basis points. Flagstar appears to be taking share, at least judging by those numbers. Most other banks are reporting sizeable volume drops.

With home prices back above peak bubble levels, the question of affordability invariably comes up. CoreLogic crunched the numbers and it turns out that if you adjust for inflation, the median mortgage payment (P&I) on the median house is much lower than the peak years. This is being driven by the drop in rates. Of the top 10 MSAs, only San Francisco and Denver were higher than the peak. Compared to pre-bubble years (2002), they are higher. 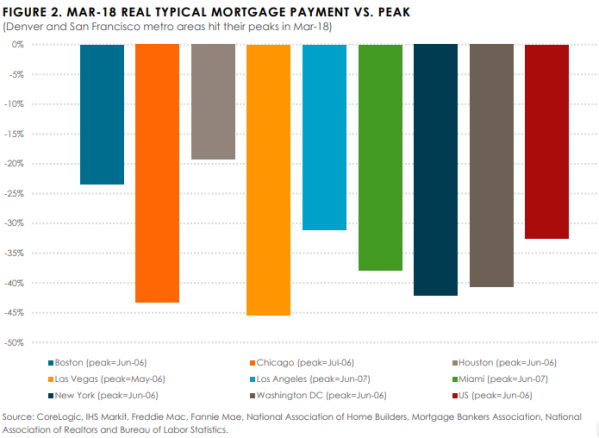 Redfin notes that some of the least affordable MSAs are starting to see an increase in inventory. Homes for sale rose 35% in Portland, 12% in San Jose, and 24% in Seattle. Whether that inventory buildup remains enough to slow the double-digit home price appreciation in those markets remains to be seen. We are heading into the seasonally slow period, and as a general rule home prices decline in Fall and Winter. Overall, home prices rose 5.7% which is the smallest increase since late 2016. Inventory levels still declined on a YOY basis.

Chinese investors were net sellers of US commercial property in the second quarter for the first time in a decade. Pressure from Beijing is the catalyst, although China has a real estate bubble of their own to deal with. Chinese money was also behind some of the activity in the big West Coast MSAs, and it will be interesting to see if that dumps some supply on the market to balance it out.