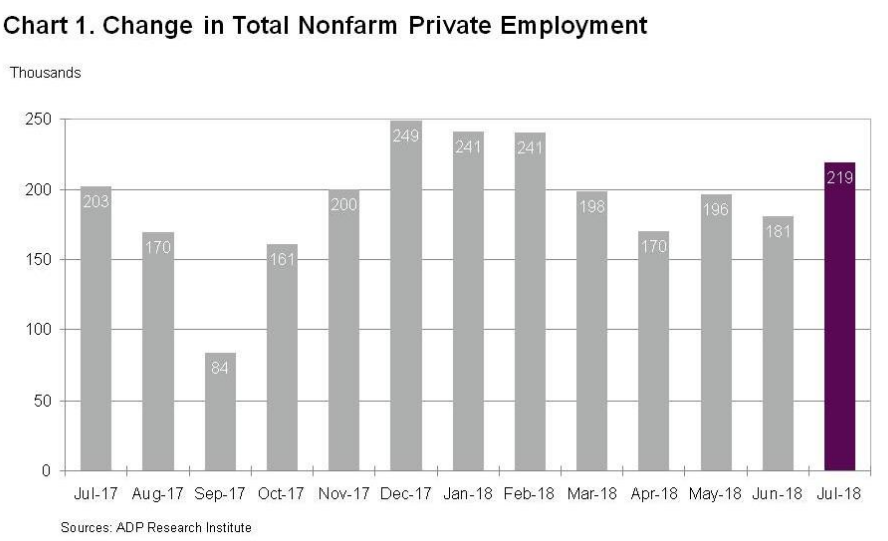 Stocks are higher this morning after good earnings from Apple. Bonds and MBS are down.

Japanese government bonds got shellacked overnight, with yields rising 8 basis points, which is causing reverberations throughout global bond markets. 8 basis points is a lot in one day regardless, but when rates were only 5 bps to begin with, it is quite the move.

Donald Trump threatened more tariffs with China. We seem to be going back and forth between detente and escalation.

The FOMC announcement is scheduled to be released at 2:00 pm EST. No changes in rates are expected, however the action will be in the statement and the interpretations for a December hike. While Trump’s criticism of the Fed’s rate hikes was unfortunate, things have been testier between the Central Bank and the Executive branch in the past. LBJ shoved William (take away the punch bowl just as the party is getting going) McChesney up against the wall in the Oval Office.

The private sector added 219,000 jobs in July, according to the latest ADP report. The Street is looking for 190,000 in Friday’s report, but as always, the bond market will be looking more at average hourly earnings than the headline payroll number. Construction added 17,000 jobs, while business services added 47,000 and healthcare added 49,000.

Manufacturing decelerated slightly in July, but continued to its torrid pace. As expected, much of the talk is about steel tariffs and when those costs will get passed on to consumers. Labor is becoming a bottleneck as well – it is causing capacity constraints.

Construction spending fell 1.1% in June (which missed estimates) and is up 6.5% on a YOY basis. Resi construction was down on a MOM basis, but increased 8.7% on an annual basis.