Stocks are flattish this morning on no real news. Bonds and MBS are flat.

The FOMC minutes didn’t offer anything too surprising. Most participants said it would be appropriate to raise rates soon, which wasn’t a surprise – the Fed Funds futures have a Sep hike as pretty much a sure thing. They worried about how trade could be a downside risk to the economy, especially if it affects business sentiment, investment and employment. They mentioned that in the “not too distant future” monetary policy will no longer be viewed as accomodative. This statement seems to hint that rate hikes should wind up next year, provided inflation remains around these levels. Note that the head of the Dallas Fed suggested that the tightening cycle might be done once we get 75 – 100 basis points higher on the Fed Funds rate.  Bonds didn’t react to the minutes at all, and the Fed Funds futures didn’t budge either.

There wasn’t much talk about reducing the size of the balance sheet, which is more or less on autopilot right now. As the yield curve flattens, you would think the Fed would consider getting more aggressive on the balance sheet unwind. Maybe not on the mortgage backed securities side, but on the Treasury side. If credit is still widely available and the demand is there, why not? If the ducks are quacking, feed ’em.

Central Bankers are meeting in Jackson Hole today. There usually isn’t much in the way of market-moving statements out of these things, but just be aware.

Initial Jobless Claims fell to 210,000 last week. We are bumping around levels not seen since 1969. When you consider the fact that the US population was only 200 MM back then (compared to 325 MM today), it is even more impressive. It certainly has economists scratching their heads.

Home prices rose 0.2% in June and 1.1% for the second quarter, according to the FHFA House Price Index. The second quarter’s pace was the slowest increase in 4 years, which shows that higher interest rates are beginning to have an effect on prices. Prices did rise in all 50 states and 99 out of 100 MSAs. 5 states (NV, ID, DC, UT, and WA) had double digit increases. The Las Vegas MSA had the biggest increase – almost 19%. The laggards were CT, AK, ND, LA, and WV. 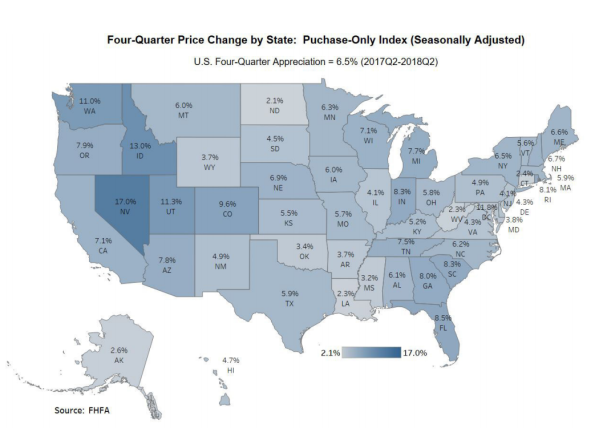 Heidi Heitkamp, a moderate Democrat from North Dakota says she will not support Kathy Kraninger to run the CFPB. She said she was inclined to vote yes, however she is concerned about Kraninger’s experience in consumer protection and also felt she “lacked empathy” for consumers and didn’t believe in the Bureau’s mission. Heitkamp has been supportive of regulatory relief, which means she was a gettable vote. Kraninger’s nomination looks largely to fall along partisan lines now.

New Home Sales fell 1.7% MOM to 627,000, which was below the Street estimate of 649,000. It is up 12.8% on a YOY basis however. The new home inventory situation is getting more balanced, with 5.9 month’s worth of supply. As always, the question is whether that inventory represents the oversupplied luxury market or the undersupplied starter market.