Durable Goods orders increased 0.4% in February, driven by an increase in commercial jet orders. Ex-transportation, they were down 0.1%. Core capital goods increased 0.8% as companies continue to plow capital back into expansion opportunities. Much of the increase in capital expenditures was in machinery, which is a positive sign for manufacturing. Still, economists are cautious on Q1 GDP, with many forecasting sub 1% growth for the quarter.

Construction spending rose 1.3% MOM and is up 0.3% YOY. Residential construction was down on a MOM and YOY basis. Housing continues to punch below its weight. Since construction is seasonally affected, January numbers tend to be a bit more volatile and have less meaning than summer numbers.

The MBA released its paper on CFPB 2.0, where they list out their recommendations for the CFPB. Much of what they say is similar to what Mick Mulvaney and Kathy Kraninger have been doing – increasing transparency regarding rulemaking and giving more guidance on what is legal and illegal. The Obama / Cordray CFPB was purposefully vague in promulgating rules, which makes life easier for regulators but makes it harder for industry participants. Regulation by enforcement was the MO of the Cordray CFPB, which ended with the new Administration, and the MBA agrees.

Specific to the mortgage business, the MBA recommends that the CFPB allow loan officers to cut their compensation in response to competitive dynamics, to extend the “GSE patch” which means loans that are GSE / government eligible are automatically considered to be QM compliant, to allow mortgage companies to pass on error costs to loan officers, and to raise the cap on points and fees.

CoreLogic looks at home price appreciation and the economic cycle. The punch line: While the current expansion is just short of a record length, and home price appreciation is declining, it doesn’t necessarily mean that house prices are in for a decline. In fact, housing typically weathers recessions quite well. I could caveat that the chart below only looks at a bond bull market. The 1978 – 1982 timespan of the misery index and inflation marked the bottom of the Great Bond Bear Market that lasted from the mid 1950s to the early 80s. The Great Bond Bull Market that began in the early 80s ended a few years ago, and while a bear market probably hasn’t begun yet the tailwind of interest rates falling from 17% to 0% isn’t going to be around this time. Finally, there are a few massive supports for the real estate market: rising wages, low inventory, and demographics. It is hard to imagine another 2008 happening if the economy peters out. 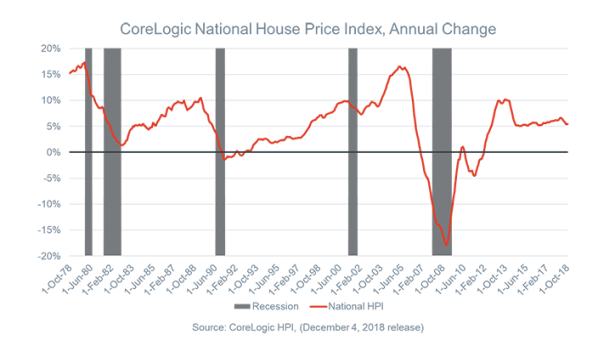