Stocks are lower on no real news. Bonds and MBS are up again.

Independent mortgage banks reported a loss of $200 per loan on average in the fourth quarter of 2018, according to the MBA. This is a drop from the $480 per loan they earned in the third quarter. This works out to be about an 11 basis point production loss per loan. In the fourth quarter of 2017, independent mortgage banks earned 20 basis points. This 11 basis point loss is the lowest since the MBA began keeping tabs on this about 10 years ago. Declining secondary marketing income was met with increasing production costs. The first quarter this year probably looks just as bad, and servicing portfolios are going to be taking a mark-to-market hit as interest rates have unexpectedly fallen. Many banks use their MSR portfolio as a natural hedge for their core business, but there will be a lag so Q1 looks to be similar to Q4.

That said, we did see a spike in applications last week, as they rose 8.9%. Purchases rose 6% and refis rose 12% as rates fell.

Donald Trump’s nominee to the Federal Reserve Board Steve Moore has called for the Fed to cut rates 50 basis points immediately. He came under criticism (and apologized) for calling for Jerome Powell’s resignation after the Fed hiked rates again in December. FWIW, left econ is pretty bent out of shape over his nomination (the Washington Post penned 2 editorials against him yesterday), mainly for his support of tax cuts, deregulation, and free markets. In an interview with the New York Times, he said “I was really angry” about the December increase, Mr. Moore said. “I was furious — and Trump was furious, too. I just thought that the December rate increase was inexplicable. Commodity prices were already falling dramatically.” Remember Trump criticized the cuts (and was beaten about the head and shoulders in the business press over it). That said, back in December, the markets thought the Fed would raise rates twice this year. They are now predicting at least 1 cut this year. Take a look at what the Fed Funds futures are saying below. Just one month ago, the market was assigning a 81% chance that the Fed would do nothing this year. Now, there is roughly a 75% chance of at least one rate cut. The swing in sentiment is pretty dramatic. 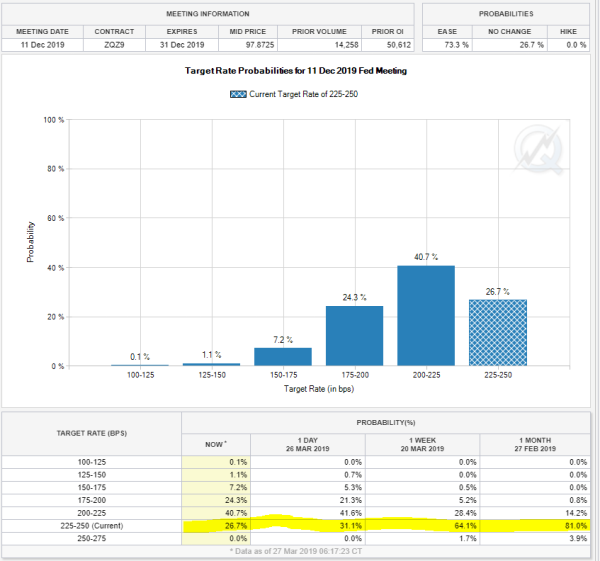 Note that the yield curve has inverted, although that is mainly due to the high 3 month rate. 2s – 10s is still positive.

While we have seen a marked deceleration in home price appreciation according to Case-Shiller, the FHFA House Price index still shows decent growth. It increased 5.6% annually in January.  Since the FHFA index only looks at homes with conforming mortgage, it ignores the jumbo space, and that is where we are really seeing the weakness in home prices. Regionally, the West and Mountain states have really slowed down, and the lagging markets in the Mid Atlantic area (especially the NYC area) are finally showing signs of life. You can see the dispersion between 2017 (blue) and 2018 (red) has really decreased as the correlation tightens.