Stocks are higher this morning as bank earnings continue to come in. Bonds and MBS are down on stronger-than-expected data out of China.

Mortgage Applications fell 3.5% last week as purchases rose 1% and refis fell 8%. “Mortgage applications decreased over the week, driven by a decline in refinances,” said Joel Kan, MBA Associate Vice President of Economic and Industry Forecasting. “With mortgage rates up for the second week in a row, it’s no surprise that refinancings slid 8 percent and average loan sizes dropped back closer to normal levels.” The average mortgage rate rose 4 basis points to 4.44%. The refinance index has rebounded smartly over the past several months, but we are nowhere near the levels of the 2015 refi boom, let alone the 2011-2012 boom. 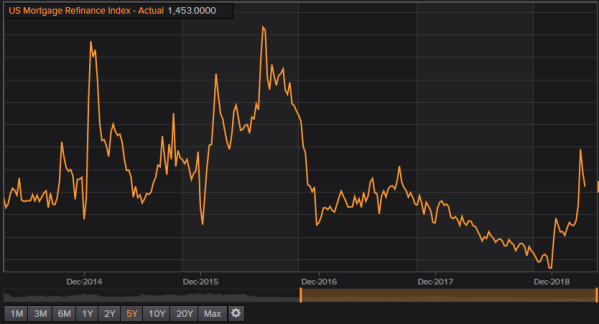 Builder optimism inched up as the the NAHB / Wells Fargo Housing Market index rose 1 point to 63. As has been the case throughout the recovery, the West led the pack, with the Midwest and Northeast picking up the rear. “Builders report solid demand for new single-family homes but they are also grappling with affordability concerns stemming from a chronic shortage of construction workers and buildable lots,” said NAHB Chairman Greg Ugalde.

Industrial Production slipped 0.1% in March, while manufacturing production was flat. Capacity Utilization dropped .2% to 68.8%. This was generally a disappointing report, however orders for business equipment and capital expenditures bounced back after a deep decline in February. Over the past several years, the first quarter has been weak, and it looks like this year is more of the same.

New FHFA Chairman Mark Calabria said he takes the role with a “great sense of urgency” with regard to reforming Fannie Mae and Freddie Mac. He was confirmed as FHFA Chairman last week on a straight party line vote. “The mortgage market was at the center of the last crisis, as it has been for many past financial crises,” Federal Housing Finance Agency Director Mark Calabria said Monday in his first official remarks as head of the agency. “I believe the foundations of our current mortgage finance system remain vulnerable.”