Stocks are higher this morning as we are approaching detente in the US-China trade spat. Bonds and MBS are higher.

Bonds are rallying globally, with the German Bund yield hitting a record low of -39 basis points. Ex-IMF Chair Christine Lagarde is in the running to replace Mario Draghi as the head of the ECB. She is considered to be more of a politician, so the markets are interpreting her nomination to be bond-bullish. US rates will be influenced by overseas bond markets, so that means lower rates here at least at the margin.

Christopher Waller and Judy Shelton are the latest Trump picks to join the Federal Reserve Board. Judy Shelton has been vocal in criticizing the Fed’s practice of paying interest on excess reserves, and has questioned the effectiveness of the current regime of floating exchange rates versus the gold standard and the gold exchange standards of yesteryear. While there is a 0% chance we go back to some sort of hard-asset backed currency, between the serial bubbles of the past 40 years and the hyper-inflation of the 1970s, the economic record of post-Bretton Woods era (basically from when Nixon closed the gold window) has been mixed.

Manufacturing expanded in June, according to the ISM Manufacturing report. That said, it decelerated compared to May. Tariffs remain the largest concern. New Orders were flat, while employment and production increased.

Mortgage Applications were more or less flat last week, as purchases increased 1% and refis fell 1%. Mortgage rates were unchanged-to-slightly lower, depending on the product. We have left the tightening-driven doldrums of 2016-2018 and approaching more normal levels. Here is the MBA Mortgage Index going back 20 years to give some perspective:

Private payrolls increased by 102,000, according to the ADP Employment Report. This is the second weak-ish reading in a row. Jobs were created in education and health as well as professional and business, while the construction sector lost jobs. Note the Street is looking for 160,000 new payrolls in Friday’s jobs report. Separately, initial jobless claims fell to 221k last week. You can see the drop-off in hiring in the ADP chart below: 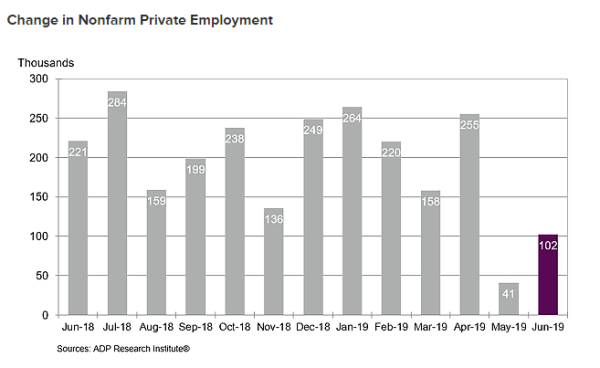