Stocks are lower after yesterday’s Trump Trade Tweet. Bonds and MBS are up.

Donald Trump sent bonds higher yesterday afternoon with this tweet saying that trade talks had broken down between the US and China, and he was therefore imposing an additional 10% tariff on $300 billion in goods from China. This sent stocks reeling, and the 10 year bond yield down about 10 basis points. MBS were slow to react, however we did have some reprices late in the day. If you look at the box scores above, you’ll see we finally have a 3 handle on the 30 year fixed rate mortgage. Commodities were also slammed, with oil down 8%.

The escalation in the tariff wars caused some strategists to bump up their probabilities of a September rate cut. Goldman’s Jan Hatzius sees a 70% chance of 25bps, 10% of 50, and 20% of no change at the FOMC meeting next month. This was mirrored in the Fed funds futures market, however the 50 basis point cut looks unlikely. They Sep futures are pricing in an 85% chance of another 25 bps. They were pricing in a 56% chance of a rate cut before the tweet came out.

Some of the rally in bonds yesterday was almost certainly due to convexity-related buying, which means hedge adjustment activity. This sort of buying is invariably violent and temporary, which means mortgage backed securities will probably lag the move for a day or two. That said, the path of least resistance for rates remains down, especially since overseas bond yields followed along. The German Bund now yields negative 48 basis points. In fact, their longest term bond – 29 years – is now negative. Think of it: tying your money up for 29 years to get…. absolutely nothing. This is the fixed-income equivalent of buying Salon.com stock at 1000x pageviews in 1999. 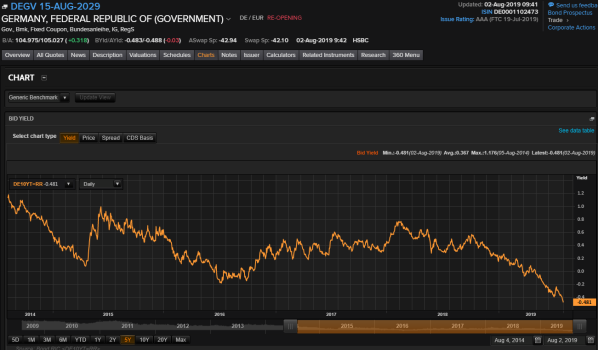 Overall a good report, and now stock bullish given the Fed’s new posture. Wage growth is picking up and average hourly earnings keep trending upward despite PCE inflation that is stuck in the high teens.