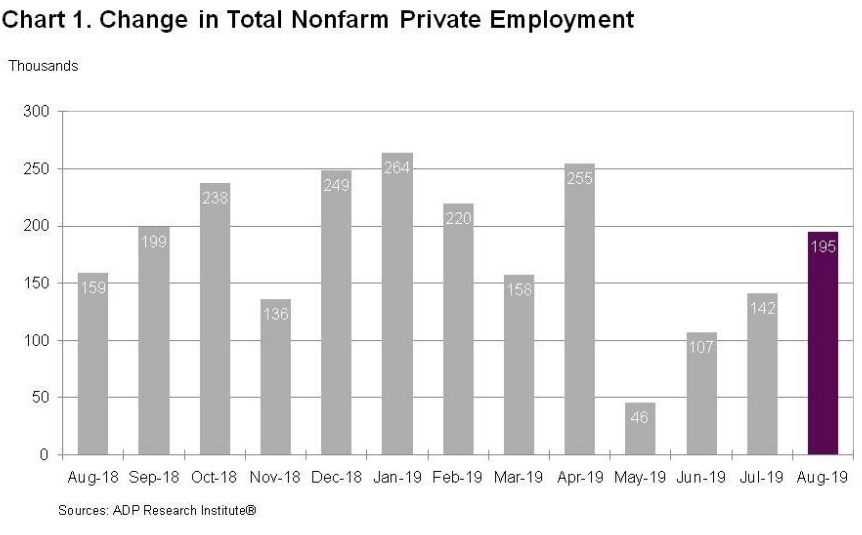 Stocks are up this morning after China and the US supposedly have scheduled an October meeting. Bonds and MBS are down on the risk-on trade.

We have quite a bit of strong data this morning, starting with the ADP jobs report, which came in at 195,000. This was much higher than the 149k the Street was looking for, and the 158k expected for tomorrow’s jobs report. This was the highest number in 4 months. Manufacturing added 8,000 jobs, so we aren’t seeing any sort of trade-driven pull-back in that sector. Construction added 6,000 jobs. Where are jobs shrinking? tech and mining. 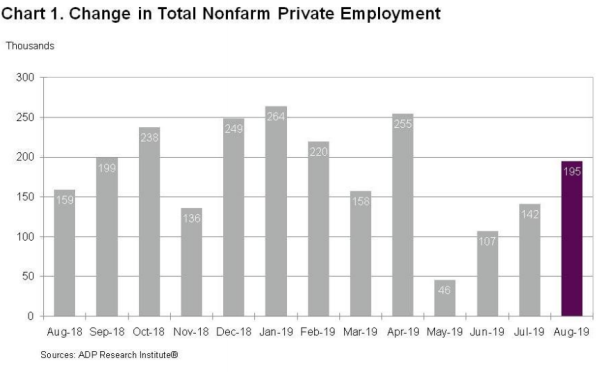 Challenger and Gray released their layoffs report, which backed up the ADP report of job cuts in tech. The layoff report is based on press releases, not actual job cuts. US employers announced 53,480 job cuts last month, of which 10,000 were due to trade war issues. That said, most of the job cuts were in retail. “Employers are beginning to feel the effects of the trade war and imposed tariffs by the U.S. and China. In fact, trade difficulties were cited as the reason for over 10,000 job cuts in August,” said Andrew Challenger, Vice President of Challenger, Gray & Christmas, Inc. “We are continuing to see investor concerns shaking confidence in the market, and employers appear to be cutting workers in response to a slowdown in demand for their products and services,” he added.

In other economic data, productivity in the second quarter was unchanged at 2.3% and unit labor costs were revised upward to 2.6%. The Street was expecting a downward revision in productivity. Hourly compensation was revised upward to a 4.9% increase. Initial jobless claims came in at 216k.

We had a slew of Fed-speak yesterday, with a wide range of opinions, from John Williams of the NY Fed avoiding the dovish bent versus St. Louis President James Bullard advocating for 50 basis points. FWIW, the market is virtually unanimous in its forecast of a 25 basis point cut at the September 17-18 meeting.

Despite falling rates and rising home prices, bidding wars for properties hit an 8 year low in August, according to Redfin. “Despite remaining near three-year lows, mortgage rates have failed to bring enough buyers to the market to rev up competition for homes this summer,” said Redfin chief economist Daryl Fairweather. “Recession fears have been enough to spook some would-be buyers from making the big financial commitment of a home purchase. But assuming a recession doesn’t arrive this fall or winter, consumers will likely adjust to the new ‘normal’ of continued volatility in the stock and global markets, and the people who need and want to make a move will take advantage of low mortgage rates. As a result, I still expect homebuying competition to pick back up in the new year.”