Stocks are lower this morning after an attack on a Saudi Aramco oil facility sent oil prices up nearly 20%. Bonds and MBS are up.

A Saudi Aramco facility that represents about 5% of global oil output was attacked, which caused the biggest spike in oil prices since the 1991 Gulf War. Saudi Aramco estimates that it will take months to bring that capacity back on line. A Yemeni movement aligned with Iran is claiming responsibility for the attack. President Trump has announced that the US Strategic Petroleum Reserve could be used to mitigate the effect on oil prices, and the US stands “locked and loaded” to prevent future attacks. While Iran has denied responsibility, cruise missiles may have been involved in the attack, which means Iranian technology. Iran and Saudi Arabia have been enemies for years and have been fighting a war by proxy.

A spike in oil prices has the potential to be inflationary, however it would more likely depress growth since it would act as a tax. This will probably push the Fed to cut rates as opposed to raise them to fight potential inflation. US consumers will be somewhat insulated, since most of the country gets its supply from US West Texas Intermediate which is a US-only market. Consumers on the East Coast will feel an effect since they get their oil from the North Sea Brent market, and many in the Northeast rely on heating oil. Front month heating oil contracts are up 8% pre-open.

Aside from the issues in the energy space, the big even this week is the FOMC meeting on Tuesday and Wednesday. The Sep fed funds futures have made quite the reversal over the past month, going from a 100% chance of a rate cut (the only uncertainty was over whether it would be 25 or 50 basis points) to a roughly 25% chance they do nothing and a 75% chance they cut by 25 basis points. 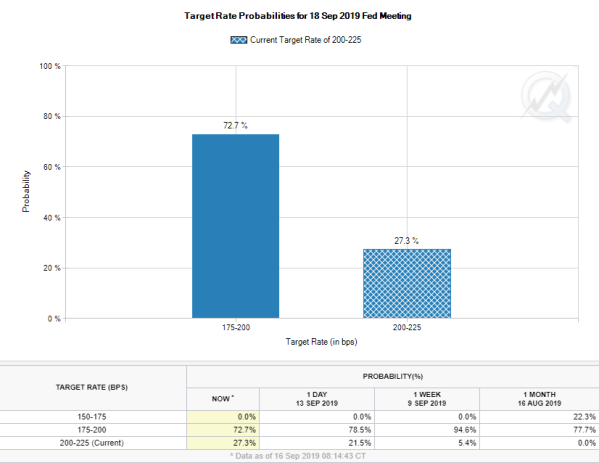 The action in the Fed announcement Wednesday will undoubtedly be in the dot plot (which is the Fed Funds forecast) and the GDP forecast. A potential war in the Middle East has got to affect the numbers, and it will be interesting to see whether they bump up the inflation numbers and / or take down the GDP estimates. Regardless, political uncertainty tends to be negative for business, so I would expect to see more dovishness in the Fed Funds futures.

Last week was brutal for mortgage rates, as the average rate on the 30 year fixed rate mortgage rose 20 basis points last week. It probably represents a technical reaction to the massive rally we have seen in rates this year already. “These sorts of bad performances are most often seen in the wake of stellar performances,” said Matthew Graham, chief operating officer of Mortgage News Daily. “August was the best month for mortgage rates, and 2019 has been the best year since 2011. And that’s precisely why this terrible week is possible: It’s largely a technical correction to the feverish strength in August.” In other words, markets don’t go straight up and they don’t go straight down. Volatility begets volatility and you will see massive rallies in the context of a bear market and vice versa. Remember that volatility in rates is bad for MBS investors in general and that will flow through to rates.