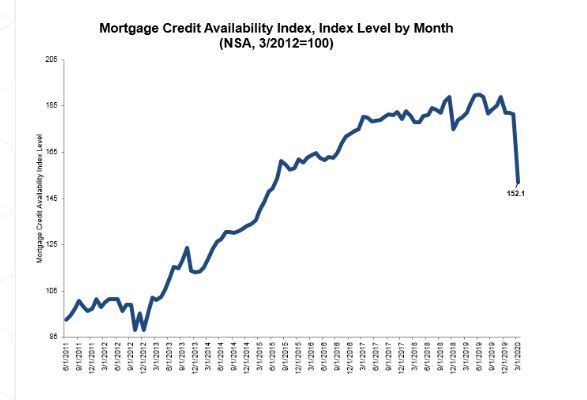 The Fed maintained interest rates at 0% and pledged to continue to do what it can to support functioning markets, including buying agency mortgage backed securities and treasuries. They didn’t specify amounts, just that they wanted to keep orderly markets. As Dave Stevens noted, it is clear the Fed wants to see lower mortgage rates as a way to stimulate the economy. The problem with that of course is that the CARES Act is doing the exact opposite – it is restricting credit more than what happened in 2008. The MBA’s Mortgage Credit Availability index took a nosedive in March, and I think it will be much, much worse in April.

Flagstar just announced a 5 point LLPA for cash-out refis. It is clear that these are the next program to go bye-bye, joining jumbos, non-QM, and sub 700 FHA. The law of unintended consequences rears its ugly head once again. I wonder if the government could tweak the CARES Act to make cash-outs ineligible for forbearance. That way the program could still exist and provide relief to people hit by COVID. Presumably if you do a cash-out, you have money to live on, so….

Personal incomes fell 2% in March and personal spending fell 7%. The personal consumption expenditure index remained under control. I suspect that increasing food prices are being offset by lower energy prices.

Mortgage REITs AGNC and Annaly reported yesterday, and needless to say both were hit hard by COVID. Both have completed their deleveraging, and AGNC noted that its book value per share increased by 8% in April, after declining about 22% in Q1. For the agency REITs, it looks like the crisis is over.

Another round of stimulus may be a bridge too far. Nancy Pelosi wants to force states to vote by mail, and that is a non-starter with Republicans. Mitch McConnell wants lawsuit protection for businesses that remain open during the COVID crisis, and that is a non-starter to Democrats. As Travelers noted on its conference call, trial lawyers smell an opportunity here and are ginning up lawsuits as we speak.