Stocks are flattish this morning on no real news. Bonds and MBS are up small.

Initial Jobless Claims fell by 3,000 to 218,000, while the Index of Leading Economic Indicators increased by 0.2%, below expectations. This index is predicting that growth will moderate in the coming months. Note that Goldman has taken its Q2 GDP estimate up to 4%, which is a torrid pace.

Existing Home Sales fell 0.4% last month to a seasonally adjusted annual rate of 5.43 million. Existing Home Sales are down 3% on a YOY basis, making this the third consecutive month with a YOY decline. The median house price hit a record, rising 4.9% to $264,800. While restricted supply has been an ongoing issue, the market is beginning to feel the pinch of rising rates and prices. The first time homebuyer accounted for 31%, which is a decrease and well below the historical norm of 40%. At current run rates, we have about 4.1 month’s worth of inventory. Some realtors noted that potential sellers are pulling their homes off the market for fear they won’t find a replacement. We need a dramatic increase in home construction to fix the issue and so far we are seeing modest increases.

Speaking of home price increases, the FHFA reported that prices rose 0.1% MOM in April and are up 6.4% YOY. Since the FHFA index ignores jumbo and non-QM, this is prime first-time homebuyer territory. Home price appreciation is beginning to converge as the laggards like the Mid-Atlantic (which covers NY and NJ) are picking up steam. The dispersion a year ago was huge.

CoreLogic estimates that a third of all MSAs are now overvalued. The last time we hit this level was early 2003, just before the bubble hit its stride. It is natural to ask if we are in another bubble, and IMO the answer is “no.” The term “bubble” gets thrown around so much that it has lost its meaning. The necessary conditions for a bubble (magical thinking on the part of buyers and the financial sector) just aren’t there. China has a bubble. Norway has a bubble. The US does not. 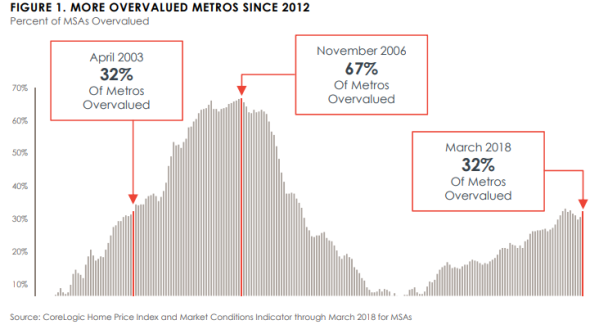 The US coastal and Rocky Mountain areas have the most overvalued residential real estate, but aside from that it is still cheap / fairly valued elsewhere. Either the overvalued MSAs will start building more homes, or the employers in those MSAs will begin to move more operations to cheaper areas. You can see that already with Amazon.com de-emphasizing Seattle. Some MSAs become to cheap to ignore (the Rust Belt, for instance) and others become so expensive that companies cannot attract entry-level talent anymore. For a hotshot MIT data scientist, working at Google or Facebook sounds very cool, but if you can’t afford an apartment are you really going to be willing to work there?

Foreclosure starts fell in May to 44.900, which is a 17 year low. The foreclosure rate of 0.59% is the lowest in 15 years. At the current rate of decline, the foreclosure inventory is set to hit pre-recession levels later this year. The Northeast still has a foreclosure backlog to deal with, but the rest of the country has moved on. 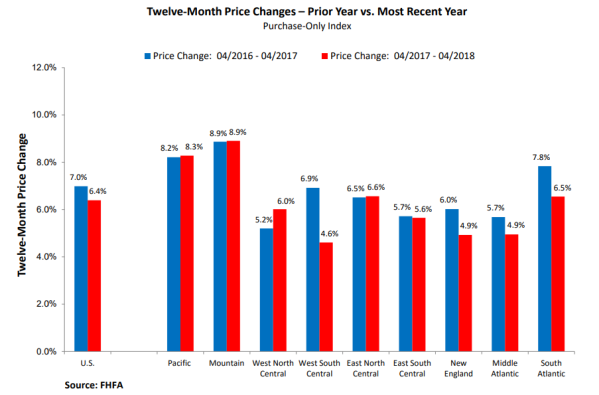 HUD is asking for public input into its disparate impact rules, which were dealt a blow at SCOTUS. Disparate impact is a highly controversial legal theory that says a company is guilty of discimination even if they didn’t intend to discriminate – if the numbers don’t match the population the lender is guilty, no questions asked. That theory was dealt a blow with a 2015 ruling that said the plaintiff must be able to point to specific policies of the lender that explain the disparate impact. HUD is now looking to tweak the language to conform to this ruling.

Incoming CFPB nominee Kathy Kraninger is getting some static from Democrats due to her position at DHS. They are asking questions about her role in the zero tolerance policy and child separations. Elizabeth Warren is putting a hold on her nomination until she answers these questions. That may not be a disappointment to the Administration however. The gameplan may be to slow-walk a new CFPB nominee in order to keep current Acting CFPB Chairman Mick Mulvaney at the helm of the agency.