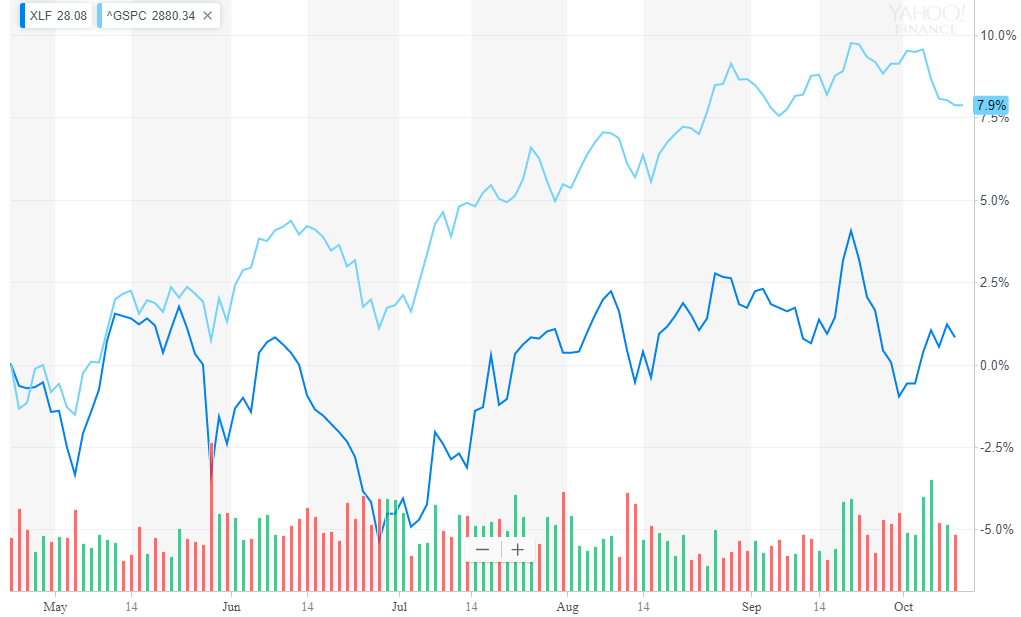 Stocks are flat this morning on no real news. Bonds and MBS are flat as well.

Mortgage Applications fell 1.7% last week as purchases fell 1% and refis fell 3%. The average contract interest rate for conforming loans increased to 5.05% from 4.96% last week. This is the first print over 5% since 2011.

Donald Trump jawboned the Fed a little yesterday, saying “I think we don’t have to go as fast” referring to the Fed’s pace of tightening. Politicians universally love loose central banks and loathe hawkish ones. Ronald Reagan tolerated Paul Volcker’s tightening campaign, which caused the worst recession since the Great Depression only because the inflation of the 1970s was so bad that a recession was preferable. Inflation isn’t bad right now, and if we weren’t retreating from the zero bound, the Fed probably wouldn’t need to be as aggressive as it is being. Jerome Powell said we were “a long way from neutral” last week, but what “long way” means is anyone’s guess. The market thinks another 75 bps in the Fed Funds rate and then a pause.

Fannie Mae reported that serious delinquencies (90+) fell to 0.82% in August, down .06% from July and down from 0.99% a year ago. DQs are back to 2007 levels, and more or less are sitting at historical pre-crisis averages. DQs will probably increase due to Hurricane Florence (those loans won’t go down 90 days until the holiday period), but for now the strong labor market has DQs back to normal. 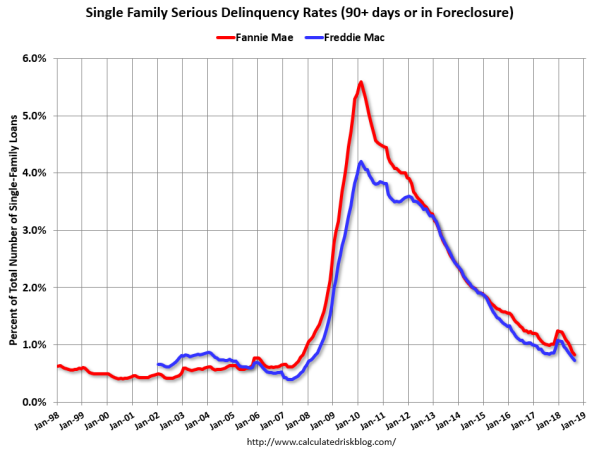 Venerable retailer Sears is expected to file for bankruptcy this week. Fun fact: in the late 1960s, the 5 biggest retailers in the US were the 5 geographic divisions of Sears. The company has been kept on life support by hedge fund manager Eddie Lampert, but he wants to see a bigger reorganization of the company.

Earnings season starts in a couple of weeks, and the banks are the first to report. Generally speaking, analysts expect the third quarter to be the strongest for the sector since the crisis, largely driven by volatility and tax effects. The bigger question is what will drive growth going forward, especially if rising rates lowers borrowing demand. We certainly see it in mortgage banking, but it could be an issue for corporate borrowers as well. Corporate borrowers took advantage of the ZIRP years to refinance existing high coupon debt and borrow at cheap rates for general corporate purposes. That may crimp borrower demand going forward. Note that the banking sector has been underperforming the market over the past 6 months or so:

Speaking of banks, HSBC reached a settlement with the Justice Department for $756 million relating to MBS issued during the bubble years. HSBC (a UK bank) bought Household Financial in the early 00s to enter the US residential real estate lending market.

The mortgage industry is a boom and bust business, and we are seeing layoffs at places like Movement, Wells, and JP Morgan. Fannie Mae’s Chief Economist thinks this is still in the early innings. “I do believe you will see more layoffs…We are at the beginning of that I would say,” he said. “It is a cyclical business and it is driven by the cyclical behavior of interest rates. So, none of that should be a surprise to anyone. The only thing different in this cycle was that it was policy that drove rates, so they were so low for so long.” We are headed into the lean Q4 and Q1 time of year – I wouldn’t be surprised to see more announcements, especially at the banks during earnings calls. 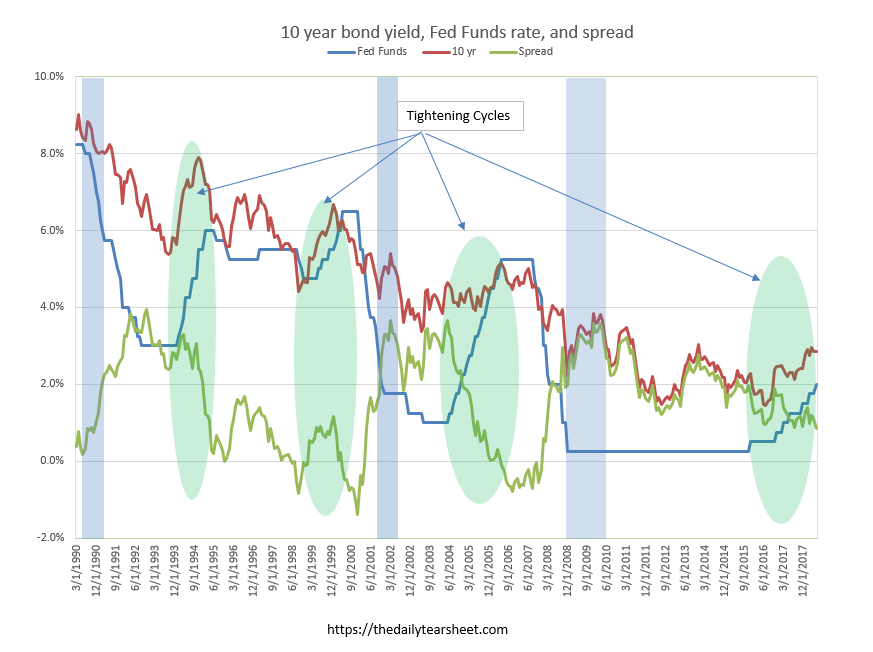 Stocks are higher after China made some conciliatory comments regarding the trade situation. Bonds and MBS are flat.

Inflation at the consumer level remains under control, with the consumer price index rising 0.2% MOM / 2.9% YOY. Ex-food and energy it rose 0.2% / 2.3%. These numbers were more or less in line with Street expectations. Energy, especially petroleum drove the increase in the index. Housing also pushed up the index, while autos and utilities exerted downward pressure.

Loan performance continues to improve, according to CoreLogic. The 30+ DQ rate fell from 4.8% to 4.2% in April. DQ rates are near historic lows, except for FL, TX, and LA which are still dealing with the fallout from Hurricane Harvey. The national foreclosure rate fell by 10 basis points to 0.6%. Home price appreciation of 7% is helping matters. In fact, home equity is increasing rapidly, but HELOC are not.

As the 2s-10s spread decreases, many in the financial press are worrying whether the slope of the yield curve is signalling a recession. We already have some strategists calling for the yield curve to invert sometime in 2019. An inverted yield curve (where short term rates are higher than long term rates) has historically been a strong recessionary signal. As a general rule, the yield curve flattens during tightening cycles. In fact, it did invert in the late 90s (before the stock market bubble burst) and during the real estate bubble (before the Great Recession). 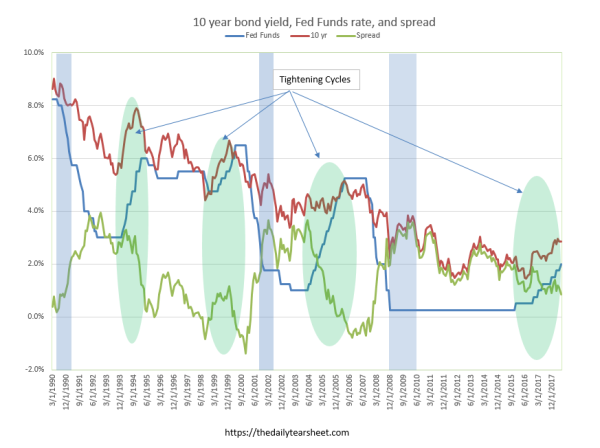 Recent Fed research indicates the 2s-10s spread may not be the best signal of an upcoming recession. It suggests the spread between the 3 month T bills and 18 month Treasuries could be more predictive. Another signal is the Eurodollar futures market. The idea is that the Fed would use these indicators as a yellow signal and stop tightening before they risk a recession.

To me at least, the last two recessions had very little to do with the Fed. We had a stock market bubble, and we had a residential real estate bubble. To say the Fed caused those recessions implies that these bubbles would have kept on going had the Fed just stayed away (or stopped tightening sooner). That is a big assumption – all bubbles eventually come to an end, and when they do you have a recession. The tightening may have been the catalyst to initiate the recession, that is a question of “when,” not “if.” We were going to have a recession given we had a bubble in place already. And the Fed might have been guilty of causing the bubble in the first place, but that is a separate question.

Of course, all bets are off when it comes to this yield curve versus the past. The size of the Fed’s balance sheet relative to the economy is vastly different this time around. Pre-Great Recession, the Fed had about $800 billion worth of assets. Now it is about $4.4 trillion. To draw comparisons, you would have to estimate where the 10 year would have been without Operation Twist, QE1, QE2, and QE3. Punch line, the yield curve may in fact invert if the Fed continues to tighten and inflation remains under control. The signal-to-noise ratio of the yield curve is extremely low, so take it with a grain of salt.