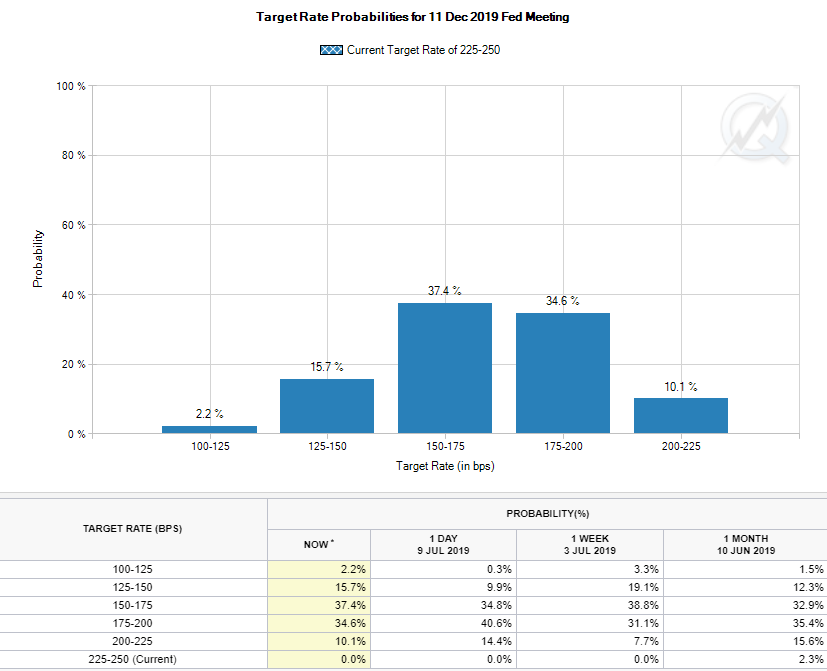 Stocks are lower as we await Jerome Powell’s Humphrey-Hawkins testimony. Bonds and MBS are flat.

Bonds were initially lower this morning, with the 10-year touching 2.10%. They rallied back after Powell’s prepared remarks were released. Here is the paragraph that probably caused it:

In our June meeting statement, we indicated that, in light of increased uncertainties about the economic outlook and muted inflation pressures, we would closely monitor the implications of incoming information for the economic outlook and would act as appropriate to sustain the expansion. Many FOMC participants saw that the case for a somewhat more accommodative monetary policy had strengthened. Since then, based on incoming data and other developments, it appears that uncertainties around trade tensions and concerns about the strength of the global economy continue to weigh on the U.S. economic outlook. Inflation pressures remain muted.

Powell is scheduled to testify at 10:00 am. Note that we will also get the minutes from the June meeting at 2:00 pm today. Given how jittery the bond market is, we could see some volatility.

Mortgage applications fell 2.4% last week as purchases rose 2.3% and refis fell 6.5%. The average contract rate on a 30 year fixed rate mortgage fell 3 basis points to 4.04%. There is some seasonal noise from the July 4 holiday baked into the numbers. Separately, the MBA’s Mortgage Credit Availability Index rose by 0.2% in June. Conventional credit expanded, while government credit contracted slightly. Jumbo credit is the easiest it has ever been, at least since the series started in 2011.

The House passed legislation yesterday which clarifies which VA loans are eligible to be included in Ginnie Mae Securitizations. They also passed a bill which would lower the mortgage insurance premiums for first-time homebuyers who complete a housing counseling course.