Not a lot of news to work with, but most of the business press is fixated on the stock market sell-off and trying to craft a narrative that Trump (or the government shutdown) is behind it. This is nonsense. There is a sea change in the market’s perception that the Fed has overshot, and you can see it the chart below, which shows the expected Fed Funds rate for a year from now. 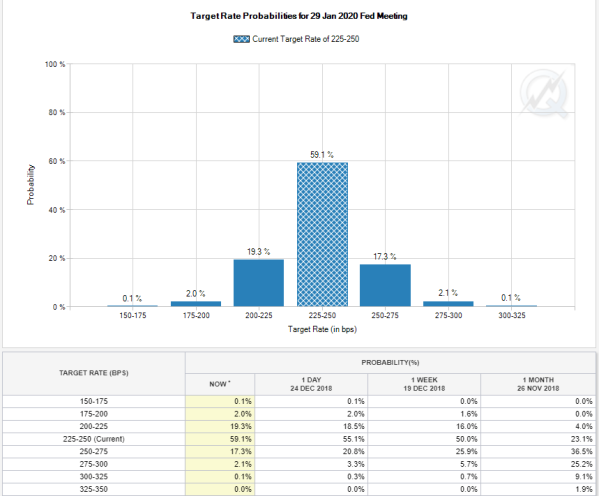 Right now, the central tendency is that there will be no more rate hikes in 2019. But take a close look at the implied probabilities today and compare them to where they were a month ago. At the end of November, the markets figured there was a 23% chance that there would be no further changes, a 37% chance of one more hike, and a 25% chance of two more hikes. Look at the probabilities now: 59% chance the Fed does nothing in 2019, a 17% probability they hike 25 basis points, and a 19% probability the next move is a rate cut. That is a tremendous change in market perception in just under a month, and THAT is what is driving the markets. Not the government shutdown. Not Trump jawboning Powell about interest rates, especially since the markets are saying that Trump is right. Hard for the business press to massage that point.

FWIW, the Atlanta Fed is predicting Q4 GDP to come in at 2.7%. If there is a recession coming in 2019, today’s numbers sure are not signalling one.

There is concern in the economy that housing is slowing down, but in all honesty, housing never really recovered all that much, at least as far as building is concerned. We still have such a deficit between supply and demand that any fears of another 2008 – style market collapse are misplaced. Bottom line: the US taxpayer has been bearing the credit risk of 90% of all new origination over the past 10 years. The banking system does not have the mortgage credit risk issues it did during the bubble days – the private label mortgage market does not have the footprint it did a decade ago.

There is fear of a drop in global demand, and that is what the declines in commodity prices are saying. The Chinese economy is living on borrowed time, as they have a massive real estate bubble that will burst at some point. Europe continues to muddle through, and Japan’s start-stop economy is beginning to hiccup again. Fears of a global economic slowdown are a valid fear, however the punch line from that is ultimately lower global interest rates, which is a plus for the US, not a negative.