Stocks are lower as the trade-driven sell off continues. Bonds and MBS are up. Note Jerome Powell will be speaking around lunch time. Also, the long-awaited Uber IPO will price after the bell.

Inflation at the wholesale level increased 0.2% MOM and 2.2% YOY in April according to the Producer Price Index. Ex-food and energy, they rose 0.1% / 2.4%. We will get the consumer price index tomorrow.

FHFA Chairman Mark Calabria said that Fannie and Freddie may be released from conservatorship even if Congress doesn’t accomplish housing reform. He also signalled that Congress would have an “entire Congress” – i.e. at least 2 years to hash out a solution. Calabria has not said that he would end the “net worth sweep” which sends all of the GSE profits to Treasury, which has created capital shortages for the GSEs.

Fewer and fewer mortgages are being made in the lower price tiers, which is having an impact on entry-level borrowers.  The article blames lender focus on the jumbo space, but that probably isn’t really the driver. They look at the number of low balance mortgages (10k – 90k) being originated today versus 10 years ago. It turns out that the number of small loans is definitely lower. I think there are a few factors going on here: First, 2009 was the beginning of the big wash-out in real estate prices and the number of homes in that price range was a lot higher in 2009 than it is today. In other words, home price appreciation is the biggest driver. Second, compliance costs are simply much higher, and as the MBA has demonstrated, costs to originate have been rising relentlessly. FWIW, there is demand for low balance mortgages – the prepay speeds are much lower so investors are willing to pay up for them – but that probably doesn’t offset higher costs. Finally, it is hard to get loan officers excited about an 80k mortgage when they are only making 75 basis points on it to begin with. Given that an 80k mortgage requires as much effort as a 800k mortgage, it makes sense for loan officers to focus on larger loan balances. 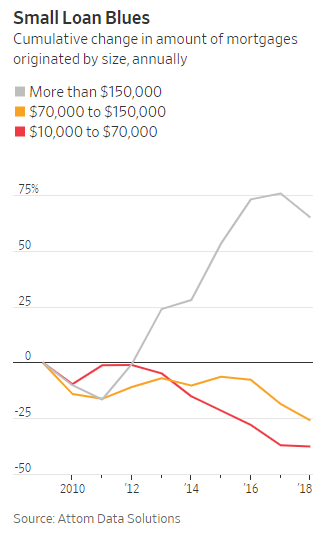