Stocks are higher this morning the Trump Administration works to get the economy going again. Bonds and MBS are flat.

With the Fannie 2.5 over 104, the margin calls are back. The NY Fed needs to take a break.

The government is starting to work on getting the economy re-opened in the next four to eight weeks. The idea would be to start opening up areas which never really had too many cases to begin with, and slowly work everyone back in. Larry Kudlow said: “It’s the health people that are going to drive the medical-related decisions,” National Economic Council Director Larry Kudlow said in an interview with Politico webcast on Tuesday. “But I still believe, hopefully and maybe prayerfully, that in the next four to eight weeks we will be able to reopen the economy, and that the power of the virus will be substantially reduced and we will be able to flatten the curve.”

We will get the FOMC minutes out at 2:00 pm today. Usually the FOMC minutes are a non-event but today could be different. Of course MBS are marching to their own (NY Fed) drummer these days and are gently rising regardless of how the bond market is trading. At a minimum, it will make interesting reading.

Mortgage applications decreased 18% last week as purchases fell 19% and refis fell 12%. FWIW, pricing in the secondary market has been terrible for the past two weeks and that is flowing through to primary markets. Aggregators are pricing like they don’t want the business.

Mark Calabria said that no Fannie / Freddie servicing facility is going to be made available.

“Yes and no is the answer,” Calabria told HousingWire when asked whether FHFA has a plan similar to that of Ginnie Mae, which recently announced a program to aid servicers dealing with forbearance on loans backed by the Federal Housing Administration, Department of Agriculture, and the Department of Veterans Affairs.

“The yes is we continue to monitor Fannie and Freddie servicers,” Calabria said. “We are, at this point, comfortable with our ability to deal with any servicers that may be distressed so that we can either turn them into subservicers or transfer their servicing to other parties. And we believe at this point, given the number on uptake of forbearance, we’ve seen that we can transfer servicing in a way that’s not too disruptive.

“So, the yes is we have contingency plans and procedures put in place were this distress to happen,” Calabria continued. “So that’s the yes part. The no part is, do we have a liquidity facility that we will be providing via Fannie and Freddie? The answer’s no. We don’t have the resources at Fannie and Freddie to do that.”

Calabria is making a bet that forbearance requests will come in around 2% of servicing portfolios, noting the MBA said that 1.7% requested forbearance in a sample. Of course that was the first week, so it probably is premature to say that is the number. But he isn’t buying the 25% estimates some are throwing around, at least for non-Ginnie servicers. For Ginnie servicers, he can buy that number. FWIW, this kind of feels like a Lehman Brothers moment for the servicers.

Well, this news isn’t doing anything for servicing in the bulk market.  I heard that Fannie Mae servicing trading at 1x- 2x. Freddie is 1x and GNMA is 1x to negative. In normal markets, Ginnie is a little south of 3x and Fannie is around 4x. I don’t know if theoretical marks are going to take such a dramatic hit, but if they do, bank earnings are going to take a hit next week.

The MBA sent out a statement urging FHFA to reconsider.

“The FHFA Director’s recent statements send a troubling message to borrowers, lenders, and the mortgage market. Servicers are required to offer borrowers widespread forbearance under a plan devised and approved first by FHFA and then codified by the CARES Act. Fannie Mae and Freddie Mac are contractually obligated for the payments to investors. Since Fannie Mae and Freddie Mac will eventually reimburse mortgage servicers for the payments they must advance during forbearance, Director Calabria should advocate for the creation of a liquidity facility at the Fed to ensure the stability of the housing finance market.

Finally, Anthony Hsieh had this to say on Linked In last night: 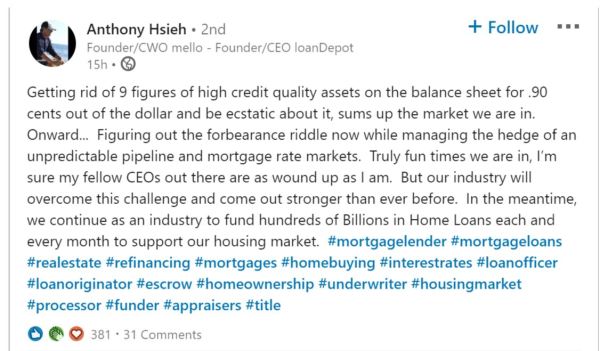